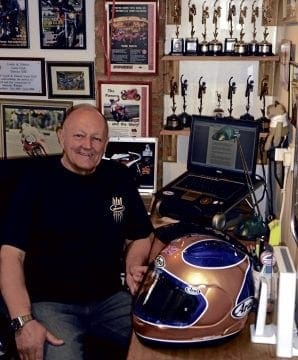 Our annual spring holiday in Florida (and before you ask, yes, I do pay for it with my own, hard-earned, cash), which by coincidence is at the same time as Daytona Bike Week, always throws up a surprise or two. And this year was no exception, with a couple of very pleasant ones.

We always stay down the Florida coast in Cocoa Beach, which gives the best of both worlds; a break from the constant rumble that is Main Street, Daytona Beach, and a great beachside location, so we hadn’t really studied the entry list for the Daytona 200 until race day morning.

Over a much needed coffee in the media centre, after an early start on race day (it’s almost two hours’ drive up from Cocoa Beach), we studied the qualifying sheet for the 200, and in the middle of the third row of the grid was a Mark Heckles.

Surely it must be THE Mark Heckles? Mark had a very successful race career in the UK and Europe before leaving for pastures new.

It didn’t take long, walking round the pit boxes, to confirm my first thoughts. Mark’s late father, the legendary Keith Heckles and I had been great friends, but I had only seen Mark a couple of times since his dad’s funeral. Mark moved to the USA several years ago and lives in New York with his wife Nicola. Brother Paul was also over at Daytona and working on Mark’s pit crew.

It was great catching up, but the team had a job to do, and do it they did. Mark ran in the top six for 53 of the 56 laps; the team completed faultless pit stops, and then for the last three laps the Yamaha clutch gave problems dropping Mark to eighth.

Even with the problem it was a brilliant result and Keith would have been so proud.

We also got to meet up with Malcolme Tunstall, of Syd’s Cycles fame – the Ducati specialist business set up in the USA by his father originally – thanks to our mutual friend and Florida resident Tim Gundlach.

Tim, who races with AHRMA, was racing in the quarter-mile dirt track at Daytona, as was Malcolme’s son John who has clearly inherited the Tunstall fast gene.

Thanks one and all for making this year’s ‘Florida Fix’ such a memorable one.