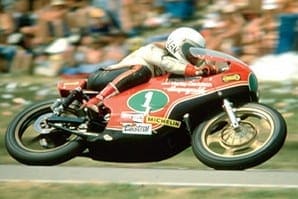 From the first round, Le Mans in France, Villa made his intensions known, taking the chequered linen first, ahead of his Harley-Davidson team-mate Gianfranco Bonera. Villa continued where he left off when the Continental Circus moved on to Mugello for round two, with another win and fastest lap.

It was from round three in Yugoslavia, a non-finish for the Italian that things got somewhat confusing for the fans. In their wisdom the sport’s governing body, the FIM, had devised a new points scoring system. From an 11 round championship only the rider’s best six scores counted, with the other five dropped. But that wasn’t all, only the best three scores from the first five rounds counted, then the best three from the remaining six.

However, Walter Villa didn’t have any cause for concern, despite giving round four, the Isle of Man TT a miss he came back with a win at round five at Assen and the following weekend at Spa Francorchamps.

Although Villa failed to finish round seven in Sweden, victories in Finland, Czechoslovakia and Germany wrapped up the rider title for him with one round remaining, but thanks to a discrepancy in Harley-Davidson’s paperwork the team failed to be awarded the constructers’ championship.

For the 1977 season, the Isle of Man TT was dropped from the calendar, with the British Grand Prix moving to Silverstone, and the FIM relented and all rounds scored.