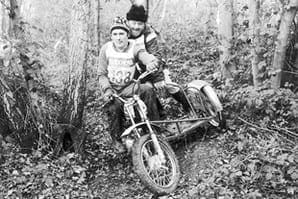 In later years he worked for Mortons Media publications including Classic Racer and was also a correspondent for the Daily Telegraph, Daily Mirror and Sunday Mirror and covered Grand Prix racing for the Sun during the Barry Sheene era. He was also a press officer for World Superbike and ran a PR company with clients such as Shell and Donington Park.

John, who had been suffering heart and lung complications, passed away on Saturday, September 29, at Kettering General Hospital near to his Northamptonshire home. His wife Anne and son Tony were at his bedside.

John, who was affectionately known as JB, reported from the TT for many years. His first races were in 1949, the year that Harold Daniell won the Senior TT on a Norton after Les Graham had seemingly built up an unassailable lead. John attended every year since up to 2010 when illness prevented him from returning. Grateful tourism chiefs presented him with a bus pass and tankard in 2009 for his 60 years of support for the Island and the event.

TT press officer Simon Crellin said: “John was one of the TT’s truly great supporters and during a period when the UK’s national newspapers shied away from the event, his support and coverage in the Daily Mirror stood out and kept interest in the event going.

“John was a real character in the press office. He had his own desk space, which we reserved every year for him and was always cracking jokes and playing tricks on the press office team. He was hugely knowledgeable about the TT races and the Island and will be sorely missed.”