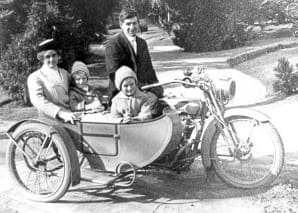 Anywhere in the world of motorcycling, especially where racing has been popular, there comes a day when people start to wonder where their friends, heroes or fellow competitors have gone. Sadly, we usually know the fate of those lost on the track, or in some off-track accident. But what became of those who slipped quietly into the background is a question many would love to have answered.

TRAILBLAZERS: KEEPING MOTORCYCLE HISTORY ALIVE IN SOUTHERN CALIFORNIA
Early day photo of Trailblazers founder A.F. Van Order and his family.
Such was the case almost 80 years ago in Southern California, when people involved in racing there wondered what had become of some of the greats of the sport who had thrilled them years before as they sped around the legendary board tracks at Beverly Hills and Playa del Ray, as well as dirt tracks on the west coast.