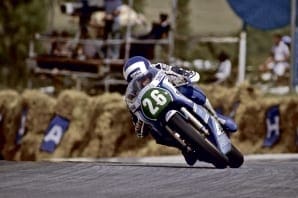 Every racing motorcycle has a story to tell, but a chance encounter with Carlos Lavado revealed that this TZ may have a more interesting history than most. At that moment we could not have guessed how interesting it was. John Parnham charts a journey of painstaking research.

He’d seen the brackets for the YPVS motor and the magnesium alloy, adjustable top yoke that were fitted to OW47s and were part of the factory kit supplied to chosen teams in 1983.

While much of the factory kit was removed when the bike was converted to run with Hummel cylinders (something that every rider/team fitted if they could afford to do so), these tell-tale parts remain.