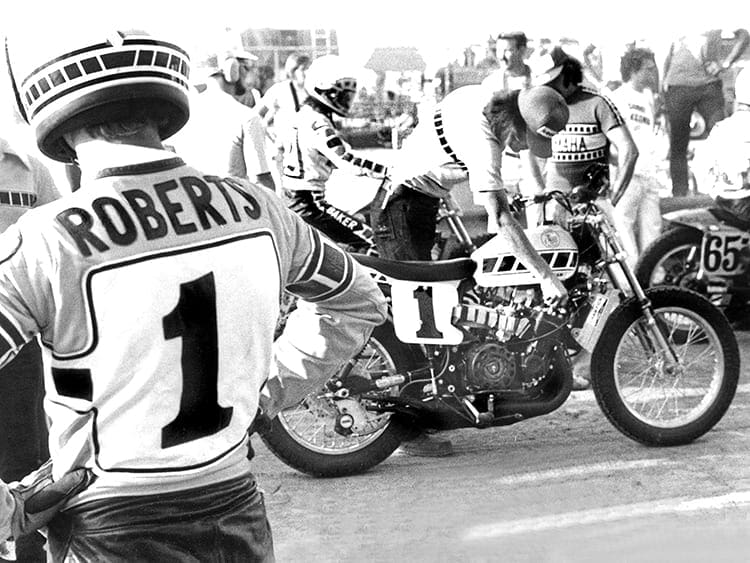 Sideways scrubbing. Looking for traction. Riding what is one of the nastiest machines ever made. There’s a reason why many in the racing world love and fear these things. Not least of all because of how they bite. And how often they can.

The motorcycle world stopped when Kenny Roberts climbed aboard Ray Abrams’ Yamaha TZ750 flat tracker at Indianapolis in 2009. He rode it like he stole it during that famous Saturday evening demonstration during the Indy MotoGP weekend – as only the great King Kenny knows how.

But that wasn’t his first time at the Indy Mile on a TZ750 flat tracker. His first appearance became famous after Roberts proclaimed, “They don’t pay me enough to ride that thing!” It was a comment that later helped AMA officials decide to ban it from competition.

The saga started in early 1974 when Steve Baker and mechanic Bob Work stopped by to visit Doug Schwerma at Champion Racing Frames, in California. The pair were on their way home after picking up the display Yamaha TZ750 road racer after the Anaheim dealer show.

One idea lead to another and Schwerma, who was already making Champion frames for AMA flat trackers, measured it up and compared it side by side with an XT650/750 Champion frame to see if it all fitted. It did, however he had to wait quite some time before he got an engine to build a frame around, and when he finally did, in 1975, it was history in the making.

Renowned race bike builder Ray Abrams, of A&A Racing in San Francisco, built up the prototype using a Champion chassis, which enjoyed similar frame dimensions to the 650, but he already knew its potential! “There used to be a quarter-mile drag strip across the bay in Freemont, and I took the bike over there when it was still in the road race frame and it turned 138mph in around 9.5sec in its stock form. So we knew it was going to be a whole lot faster!” Abrams says, laughing. 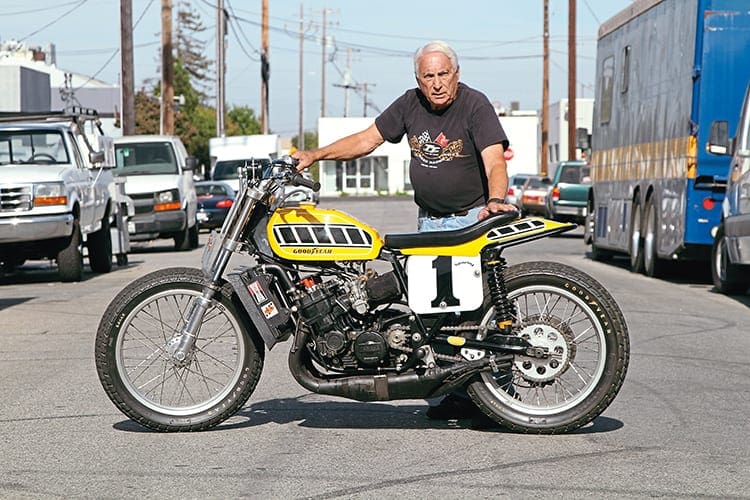 “It was really going overboard developing something nasty because it was a whole lot faster! Almost everything was different. The tyres didn’t work as well because we were putting more power through them, but we did what we were capable of doing at the time.”

The prototype was built for the Mile ovals but was tested by Rick Hocking at the Ascot Half Mile in Gardena, California, in 1975. The problem was that by 1975, Harley-Davidson’s alloy XR750 had become more competitive, which left the XT650/750 underpowered – and behind on the long straights. The TZ750 flat tracker was the obvious instant solution, plus most engines came from readily available donor road race machines supplied whole, by Yamaha.

Interest in this big-balls idea increased after Hocking set the third-fastest time during Ascot on the prototype, and it wasn’t supposed to suit half-mile tracks.

Abrams again: “My bike was originally built for Hocking. I don’t think he complained about anything. Ascot is a perfect place for a motorcycle, as you can spin the rear wheel and it’s easier to control. I don’t think there were any major problems there, and Rick was a guy, like Kenny, who was capable of riding anything you put underneath him!”

Five other TZ750 flat tracker frames were made for 1974 AMA Grand National champion Kenny Roberts, Steve Baker, Randy Cleek, Skip Aksland and Don Vesco. This was at a time when the Grand National consisted of several disciplines, where Yamaha riders dominated the road racing sector with the mighty TZ750, and Harley-Davidson on the flat tracks.

Abrams continues, “I was involved with the whole project as we supplied a lot of the parts for all of them. Five of us individually built them. They were all built by different people. We talked a lot and we did a lot of the same things at the time. We built the race wheels here for all five bikes. There’s a guy in Los Angeles who has copied them now and built two or three more.”