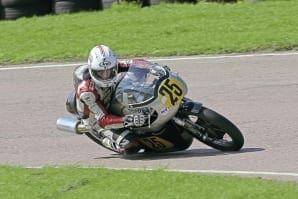 Last year proved to be the team’s most successful season, with 116 race starts and only two mechanical failures and Chris Firmin taking bike number 001, the first ever built by Andy Molnar, back in 1995, to second place in the Lansdowne British Championship.

Young Richard Molnar is planning more of the same in 2016.

In addition Richard Molnar won both 350cc and 500cc Club Championships, and finished second in the ACU 500 Classic Championship.

The Classic TT didn’t prove quite so successful, with ancillary parts causing problems, while leading both races, was a huge disappointment for the whole team.