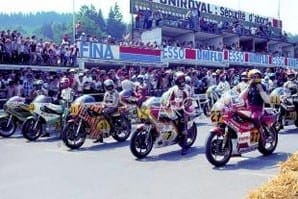 It’s almost a Suzuki benefit, as on pole there’s Phillipe Coulon, Barry Sheene next to him, then there’s Michel Rougerie (31), South African Alan North and on the very end John Newbold.

Riders behind include Steve Parrish (11), Wil Hartog (19) and Virginio Ferrari (21). In the background, the blue open face helmet of Australian veteran Jack Findlay can also be seen. Stuck in the middle of the second row are the two works Yamahas, Steve Baker (2) and Giacomo Agostini (1).

At the end of the year, the world order’s top three was as the race, Sheene, Baker, Hennen and of the 32 points scorers, just three were on Yamaha – Baker, Ago (sixth) and Austrian Karl Auer (30th). Alan North is down as a Yamaha rider but his solitary point, scored in the opening Venezuelan round was actually for tenth place on a Suzuki. All other riders were on RG500 Suzuki.