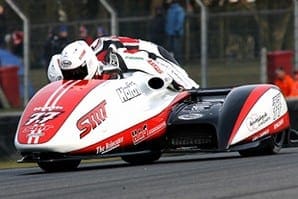 The parade lap will take place on Senior Race day, Friday June 7, and leading the outfits off will be the Scots pairing of Stuart Muldoon and Chris Gusman on board the late Jock Taylor’s 1982 race winning machine. Local hero and TT legend Dave Molyneux sets off behind them at number two, reunited with his race winning passenger of 1993, Karl Ellison. He will be taking an ex-Steve Webster 500cc Windle Yamaha around for a lap, the same outfit that was used in the European Championship in the 1980s.

Two of the most successful TT drivers ever will be in the parade with ten-time victor Rob Fisher out on a 600cc Baker Yamaha and nine-time winner Mick Boddice on a 600cc Honda. Rick Long, who was alongside him for six of those ten victories, will join Fisher whilst Boddice will have former TT regular Stuart Castles on passenger duties.

Recent winner Klaus Klaffenbock will be in the line-up, too, on the same outfit that took him to his three TT wins in 2010 and 2011 whilst, for the first time in many a year, a long wheel base outfit will be seen on the course and with an F1 1000cc engine, the LCR Suzuki belonging to that of four-times World Champion and three-time British Champion Tim Reeves. With Dan Sayle in the chair, this is the same outfit that the Kent driver is currently campaigning in the British Championship.

Drivers and outfits from previous eras will also take part in the parade including 1986 race winner Nigel Rollason, local pairing Eric Bregazzi and Jimmy Creer and many others.