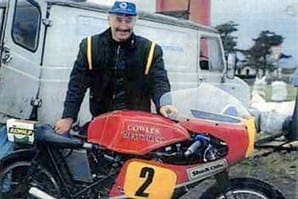 Welshman Selwyn is well known around race paddocks throughout the British Isles and is still a familiar face in the race paddock at the rear of the Grandstand on Glencrutchery Road some fifty years after his illustrious victory on Thursday September 3, 1964 riding a Cowles Matchless at an average speed of 96.270 mph.

His TT career saw him compete in 28 races, finishing 3rd, 4th, 5th and 6th twice. 1987 saw the popular Welshman return to the Manx Grand Prix racing in the Classic Classes. Once again mounted on the famous red and green Cowles Matchless machines Selwyn achieved two podium positions in the Senior Classic races in 1987 and 1989.

Hanging up his well-used leathers after the 1991 Manx Grand Prix, Selwyn had by then ridden in four Manx Grand Prix races achieving a win, a 4th and a 22nd, followed by a Classic Manx tally of three 3rd places and a 7th place.

Away from the Snaefell Mountain Course, Selwyn Griffiths also won the 1966 Southern 100 Solo Championship on the Billown Course in the south of the Isle of Man.