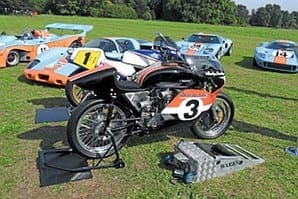 The deserved winner of the Most Original class was Dave Degens, who not only built the Dresda back in the day, but rode it to 24 Hour race success against teams with much bigger budgets. The winner of the Wow Factor for motorcycles was picked up by Allen Millyard with his incredible V-twin 100cc Honda, which he built in less than five months.