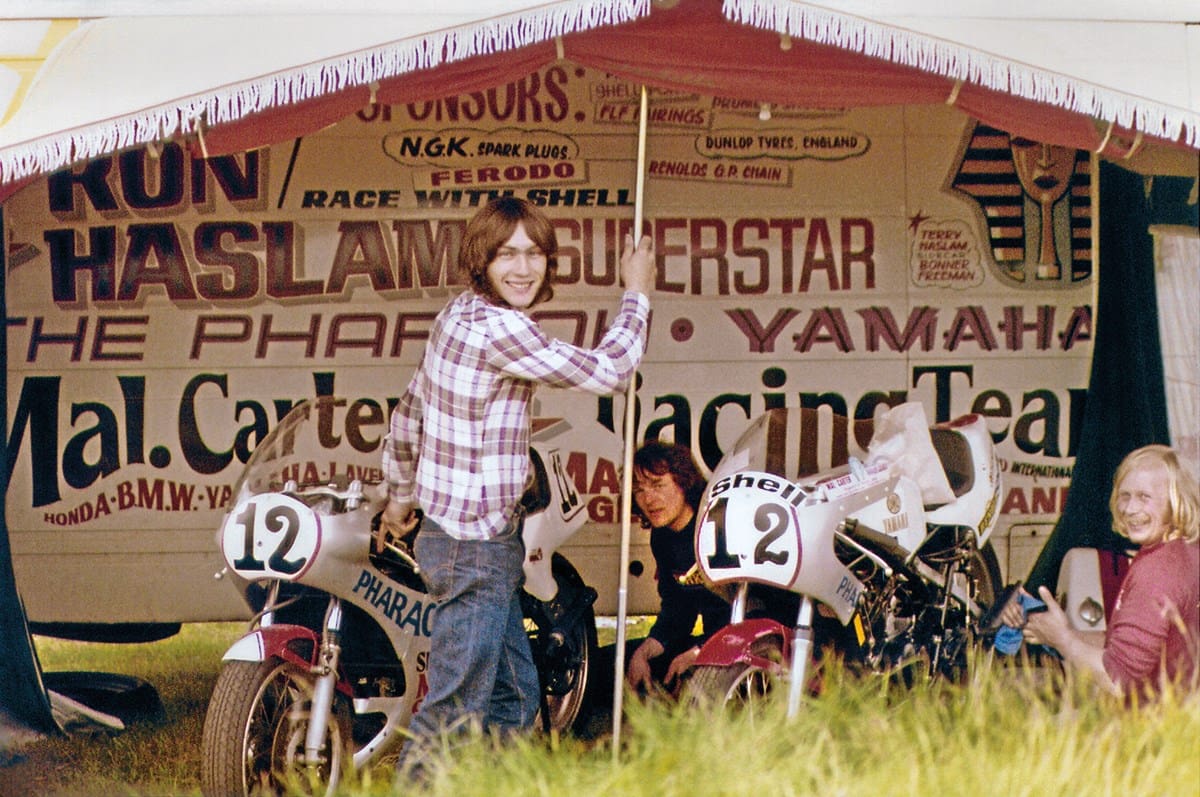 It’s refreshing to have a colour photo from the archive for once and Ron Haslam’s smile sums up the love so many have of racing. The scene appears to show a typical club racing scene, with friends helping out. There may be no factory overalls or promo ladies but the Mal Carter Pharaoh team van makes up for that, with ‘Ron Haslam Superstar’ on it!

Ron to me personifies the near-addiction levels that racing gets for some. This photo was taken in 1979, just as Ron was breaking through. He was still racing with Carter, the ex-racer and businessman who first supported him with the Yamahas you can see, but he was also in contract with Honda Britain, winning several titles and the Formula One TT race in 1981 (and 1980 but politics got in the way), and campaigned numerous other championships, including Grand Prix, for over the next three decades. He also spent time at Cagiva, Suzuki and Norton, and many will remember Ron on the Elf Honda, with its radical front end. He made a strong name as a rider who could transfer information to the team – an ideal development rider.

Ron has done it all, but there is one constant. Looking through the archive, I even found some photos from the Honda protest at the TT, when the bikes were painted black and the riders wore black leathers (long story). Ron was still smiling. From a boy who began racing on his brother’s Seeley-framed Norton Commando at Cadwell Park to racing for the Honda Grand Prix team and some of the most innovative bikes of the time, he’s done it all. And Ron and his son, Leon share the unique experience of being the only father and son racing at the same Grand Prix – at Le Mans in 2000, Ron raced in the 500cc class, while Leon was racing in the 125s. Ron still helps with Leon, himself a British champion, to this day.

Until this terrible pandemic, Ron educated and entertained while running the family racing school at Donington Park with his wife, Ann. Still backed by Honda, still fast, still smiling. Now he is still to be found in the garage on raceday, helping Leon. Racing may be addictive, but if it makes you smile…