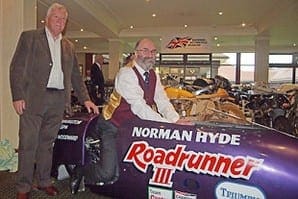 Hyde captured the World Sidecar Land Speed Record in 1972, driving his home-built Roadrunner III to an average speed of 161.8 mph at RAF Fairford – a record that remained unbeaten for over 35 years.  Norman worked as a development engineer at Triumph's Meriden factory at the time and used his experience to uprate the Triumph Trident engine that powered his Roadrunner outfit, enlarging it to 850cc and adding a supercharger.

Roadrunner III was added to the National Motorcycle Museum's collection in the 1980's but was one of the 380 machines that was severely damaged when fire tore through the building in September 2003.

Painstakingly restored by John Woodward, whose late brother Don made the original bodywork by hand, Roadrunner III was unveiled at the Motorcycle Museum on Thursday November28. Many of Norman Hyde's contemporary racers, including John Cooper, Paul Smart, Percy Tait and Tony Jefferies, joined Norman and John for the ceremony.