The early 1980s saw a resurgence in Production racing on the mainland, with the Streetbike and subsequent Metzeler 750cc and 1500cc Championships seeing full grids and top class racing. 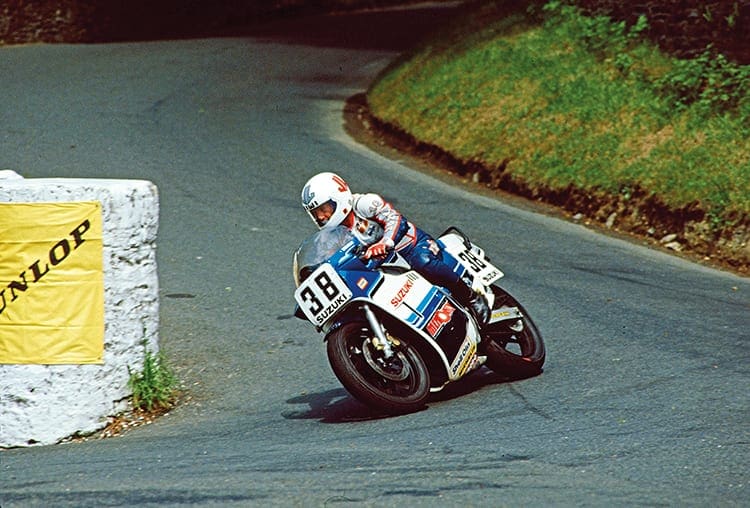 It seemed only natural that they should return to the Isle of Man TT in 1984, albeit without the massed start which was now too dangerous given the increase in speeds.

Manufacturer interest returned greatly and all of the ‘big four’ Japanese factories contested the three-lap event, particularly the big capacity 1500cc class. It was the GPZ900R Kawasaki that prevailed though and in the hands of Geoff Johnson and Howard Selby they took first and second with Swede Peter Linden giving Honda something to smile about in third after Barry Woodland, leader for the first two laps, was disqualified and removed from his original second place.

In the 750cc class, Trevor Nation and the evergreen Helmut Dahne fought a great duel on their Honda VF750s, with just split seconds separating them throughout. Nation took over the lead on the second lap and eventually got the win by just 2.2s with Dave Dean on another Honda in third. To further prove the decision to bring back the Production races was a correct one, the 250cc class saw Graham Cannell, Phil Mellor and Mat Oxley all lead at some point and it was Mellor who came out on top for his second TT win, a year after he’d claimed honours in the 350cc race.

1985
It was ‘as you were’ for 1985 and Johnson repeated his 1984 success in the 1500cc class, this time mounted on the unfavoured Honda VF1000F, beating early leader and 1976 winner Bill Simpson by just 3.5 seconds. Selby’s good form continued with another podium in third on his trusty Kawasaki. With the MCN Superstock Championship in its inaugural year on the short circuits, the 750cc class was expected to be a head to head battle between the all-new GSXR750 Suzuki and FZ750 Yamaha, but it was the Suzuki riders that dominated proceedings.

Despite wet weather in the Ramsey area, 40-year-old Mick Grant took his seventh TT win, although it was Canadian Kevin Wilson who led at the end of lap one from rapid Kiwi newcomer Glenn Williams. However, he didn’t believe the signals he was getting saying he was so high up and with his rhythm broken he dropped back to ninth at the end of the second lap. Grant eventually took the win by 13 seconds from Wilson with Tony Rutter, like Grant, enjoying a great TT, in third.

Williams set a new lap record on the third and final lap to take fourth, a brilliant effort, as the GSXR Suzuki took five of the top seven places, Dahne the best Yamaha in fifth. Journalist Oxley, riding a Honda NS250F, came out on top in the 250cc class after similarly mounted Gary Padgett, leader for the first two laps, slid off at Governor’s Bridge on the final lap with the chequered flag in sight. He remounted to take third behind Oxley and local rider Cannell.

1986
The Production races were bigger than ever in 1986, with an extra class added and although inclement weather at the beginning of race week threatened to scupper the ambitious plans, it meant two races were on the schedule for the first time, classes B and D taking place on Tuesday and classes A and C on Friday prior to the Blue Riband Senior race.

Class B, dominated by 750cc machines, was the most popular with 90 entries and it saw the first-ever 110mph lap by a Production machine, the honour going to Mellor who smashed both the lap and race records by over 5mph on his GSXR750 Suzuki.

He led from start to finish but Dahne made him work for it with the German eventually taking second, with Wilson, who would prove to be one of the best Production racers of the 1980s, in third. The concurrently run Class D, for 250cc two-strokes and 400cc four-strokes was also a record-breaking affair with Oxley setting the first 100mph lap by a 250cc production machine. However, just when it looked like he’d claim his second TT win, he slid off at Governor’s Bridge handing the victory to Barry Woodland on a GSXR400 Suzuki. Cannell again took second as Oxley got back on for third.

The final race day saw perfect conditions all around the Mountain Course and Nation annihilated the race and lap records in the Class A race on a GSX-R1100 Suzuki. He produced the first sub 20-minute lap by a production machine and a new record of 113.26mph, but it was again close as Wilson was only 8.4s adrift at the chequered flag.

Scot Brian Morrison took third with the GSXR-1100 Suzuki taking nine of the top 10 places. Class C for 400cc two-strokes and 600cc four-strokes was one of the closest races ever witnessed at the TT as Padgett (400cc Suzuki) and former Classic Racer editor Malcolm Wheeler (600cc Kawasaki) fought a race-long duel, with Steve Linsdell (600cc Yamaha) also in the mix, the latter not having to stop for fuel. Having started together on the roads, Padgett led Wheeler by 4.6s at the end of lap one but the gap was down to just 0.8s as they started their third and final lap, although it was Linsdell who now led.

However, he slipped back as Padgett and Wheeler swapped positions on the road. At the flag though, Padgett’s Suzuki held a one-second advantage over Wheeler’s Kawasaki. Tragically, this proved to be Gary’s final TT win as he lost his life in a road accident just a few days after the meeting.