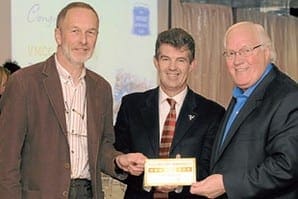 The Festival of Jurby, and associated VMCC rallies and parades, are part of the newly branded Isle of Man Festival of Motorcycling that also features the new Classic TT, the Manx Grand Prix and the Two Day and Classic Trials.

The club runs a comprehensive seven day calendar of events during the festival that includes social runs, a regularity run, a closed roads lap of the TT Course, concours events, a gala dinner and the hugely popular VMCC Festival of Jurby in the North of the Island.

In 2013 many of the world’s greatest names in motorcycling were involved with the event including Freddie Spencer and Giacomo Agostini, as well as TT stars John McGuinness, Dave Molyneux, Bruce Anstey, who paraded the famous Britten motorcycle and Conor Cummins.

Laurence Skelly, MHK, the Isle of Man government’s political member with responsibility for Tourism and Motorsport, presented the team with their award and commented: “The Vintage Motor Cycle Club is an integral part of our newly branded Festival of Motorcycling which has been very successful in its first year.

They are an integral part of the overall festival and we look forward to welcoming visiting VMCC members in 2014.”