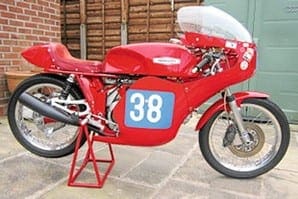 Among the interesting Italian steeds entered so far is the 2002 Ducati Bostrom 98, one of only 155 models ever made and based on the world superbike ridden by Ben Bostrom.

Charlie Williams, eight-time winner of the Isle of Man TT, will be riding the Duc’ around the testing Cholmondeley sprint track.

Charlie Williams said: “After spending a couple of years in the commentary box, I’m looking forward to having a run out on the track again. This year’s Pageant will be different as I will be swapping my trusty TZ Yamaha for Peter Fleming’s Ducati. As far as I can remember, I have never ridden a Ducati before. Luckily for me, James Toseland will be on hand to give me some tips!”

Former Superbike World Champion James Toseland will be adding his own touch of rock and roll to proceedings as he supports Status Quo in the Friday night concert of the Pageant at the head of his band, Toseland.

Toseland was just 17 when he signed his professional contract, riding a 1997 Castrol Honda HRC 600 in the 1997 World Supersport Championships. This exact bike will also be on show at the Pageant, ridden by former Manx Grand Prix rider John Davis.

James Toseland commented: “I can’t wait to see my old bike going around the track. I’d love to be able to ride my old bike but unfortunately the wrist won’t be healed from my latest operation I had three months ago, but looking forward to a great atmosphere combining two of my favourite things – rock and motorbikes!”

For further information on the Cholmondeley Pageant of Power and for video highlights from the 2013 event, please visit www.cpop.co.uk