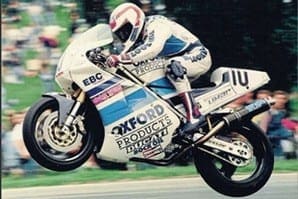 The company’s wish list includes the Ducati 888s which competed in the hands of Trevor Nation, Robert Dunlop, Steve Hislop, Jim Moodie and Jeremy McWilliams and the Peckett-McNabb Kawasakis, which Asa Moyce, Les Burgan and Mike Hunt campaigned in the late 70s.

Oxford’s early race exploits extended to the Isle of Man, where in 1981 Phil Read rode an Oxford Yoshimura 1000cc Suzuki and in 1984 Trevor Nation won the 750cc production TT aboard an Oxford CBX750. More recently, the company has title sponsored the TAG Triumph British Supersport team and Buildbase BMW.

If the quest is successful, these bikes will join John Hammond’s immaculate 1961 Aermacchi, which greets visitors in the reception area of Oxford’s impressive HQ. If the exact bikes cannot be located, then accurate recreations may also be considered.

If you can help Oxford in its quest, please contact marketing director Henry Rivers Fletcher: henry@oxprod.com