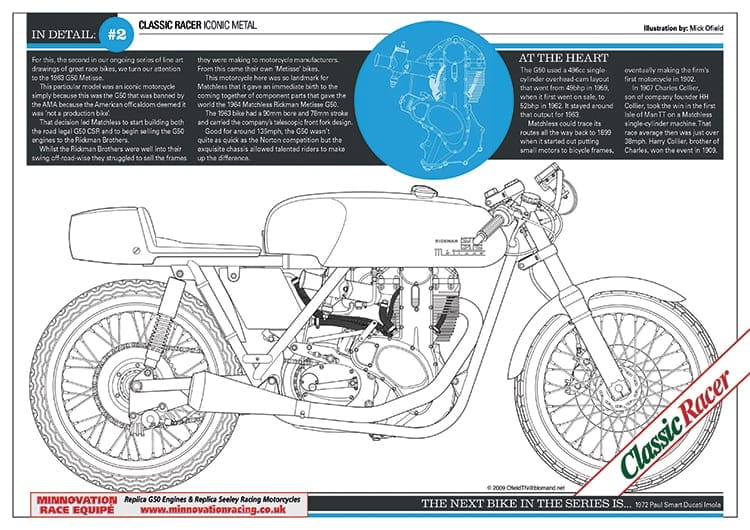 It was nice to see the line drawing of the G50 Metisse in CR 187. The machine as drawn would be 1967 spec onwards. The front forks were 1966/7 and the front and rear hubs with brakes probably slightly later.

The early 1965 bikes used AMC forks and most of the customer bikes were bought 1966 onwards. These machines were not bad handlers but on very fast, bumpy corners, for example the Thruxton circuit, you could get them shaking their head a bit.

The Rickman brothers first changed the frame as drawn, in a hush-hush way, on the BP-backed Tom Kirby entered machine used very successfully by Alan Barnett in 1968/9. This bike had the engine tilted and moved forward and downwards in the frame; the exhaust was cut and welded to come round the front down tubes. The cylinder head trimming nearly touched the frame at this point.

I think most people at the time were unaware of these works models, it was certainly not advertised. My brother, Nigel Palmer was offered these frame alterations to his machine by the factory in early 1969. He also used a scrambler yoke with his Rickman forks, where Alan Barnett used standard top and bottom yokes on his Tom Kirby entered machine.

Nigel’s Metisse was one of the best handling 500 singles around at the time, it was perfect! He did ride my near standard five-speed G50 Matchless once and thought the handling dreadful in comparison. I hope this is of some interest to some of you after all these years.

A very interesting letter Derek, thank you very much for sending it to us. We really appreciate it when CR’s genuinely amazing readership contribute with such a depth of knowledge about how a particular motorcycle performed or handled. TC