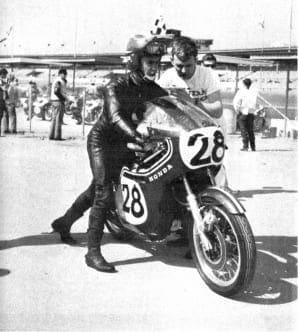 Steve giving Tommy Robb some words of advice at Daytona.

Cheshire has, over the years, produced many exciting and gifted racing motorcyclists of distinction, but one of the most loved and charismatic of all, Steve Murray, passed away in his sleep at home on February 22, 2016, aged 83.

Steve was taken from us suffering from prostate cancer.

Having been friends with Steve since his early trips to race in Ireland, North and South, in the mid/late 1950s I can honestly say there was no one who could make friends faster than Steve.