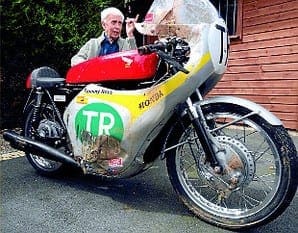 Evergreen Tommy Robb took a nasty tumble from Phil Morris’ 250 Honda during the Festival of 1000 Bikes.

Wee Tommy dropped the plot at the Essess and suffered broken ribs, a punctured lung, broken fingers, and severe bruising, which laid him low in Leicester Royal Infirmary for almost a week.

Back home, and already surveying the damage to the Honda, Tommy is somewhat overwhelmed by the messages of concern he and his family received and would like to thank everyone for their kind thoughts.

• Pre-TT wedding
Billown Course sidecar newcomers, Switzerland’s Guido Reichmuth and Zita Gwerder, sprung a surprise on their team when they got married while in the Isle of Man for the Pre TT Classic.

The only people in on the secret, prior to the wedding, were best man Dicky Gale and his wife, and bridesmaid, Monika. Classic Racer’s Lenny Hartley did the honours as official photographer.

• Got your number
The annual fund raiser for the Manx Grand Prix Helicopter Fund, which takes place at the Sulby Glen Hotel on Sunday August 26, has a very special item for the auction.

Long-time supporter of the Manx Grand Prix, Bob Clift, has donated the UK registration plate M4 MGP with all the necessary paperwork to transfer it to a UK registered vehicle. The auction starts at 7.30pm

• Jean and Jean Bacon remembered
An international road racing motorcyclist from Old Woking who died 47 years ago at a race meeting in Holland, was remembered in a moving memorial service in Holland, made all the more memorable by the attendance of his son whom he had never known.

It was on June 7, 1965, when John Bacon, crashed his 250cc Greeves at an International motorcycle race in Tubbergen in the east of the Netherlands. John died instantly from his injuries. At the time of his death John and his wife Jean had a daughter Linda, aged two and Jean was expecting their son David.

As children, Linda and David knew little of their father’s life. Sadly Jean died in 1984. Daughter Linda became consumed with an urge to find out more about her father and put out an appeal on the Vintage & Classic Motor Cycle website. The appeal found its way to a former Old Woking road racer and close friend of John’s Richard Morley.

Richard was able to fill in many of the gaps for both Linda and David. It then became known that there was to be a memorial service in Tubbergen, for the five people who had died during the history of the race circuit. Richard arranged for Linda, David and himself to attend the memorial service.