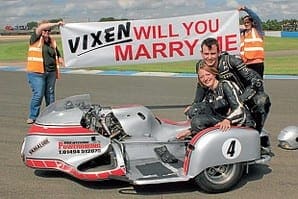 There was surely a CRMC first at the end of Saturday afternoon’s Woods Cubed/MRE sidecar race at Donington Park in August when Ben Gray, passenger to Clint Faulkner, went down on one knee at Redgate Corner to propose marriage to Vicky Cooke, who passengers for his dad, Brian Gray.

And in case Vicky was in any doubt as to what was happening a huge banner was reeled out saying ‘Vixen, will you marry me?’

Ian Johnson – CRMC chairman, fellow sidecar racer and renowned wit – had suggested that the proposal should best be made on the Tarmac rather than the adjacent gravel trap so that if Vicky opted to hurl the ring away it would be easier to find!

Fortunately there was no need to worry on that count as a tearful Vicky, who was also celebrating her 21st birthday, joyfully accepted Ben’s engagement ring in front of the rest of the sidecar field and hundreds of onlookers with a running commentary from roving reporter, Keith Martin.

With a lot of people needing to be in on the secret there was a worry that the news might leak out but Vicky confirmed that she had been caught completely by surprise. In a meticulously planned operation, provision had even been made for a fast recovery car to be sent round the track after the chequered flag if either of the happy couple had been forced to retire during the race.

So the future of the Gray sidecar racing dynasty seems assured, although Vicky did later tell this reporter that she didn’t yet feel ready to start calling her driver “daddy” instead of Brian!