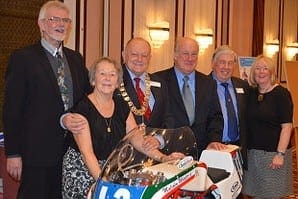 Malcolm's presidency was officially announced at the 62nd TT Riders Association Annual Luncheon, held at the National Motorcycle Museum. The achievements amongst the previous names on the chain of office, beginning with Malc's boyhood hero Freddie Frith, are 145 TT wins and an incredible 41 World Champions!

The day started for the incoming president with Malc riding into the banqueting hall on a machine of his choice. He chose his very noisy 1984 Ducati TT2 (pic below), on which he finished (a disappointed) sixth in that year's TT. He got an amazing reception. In fact the whole day was incredible, made very special by having several people attending who had played a massive part in his racing career. 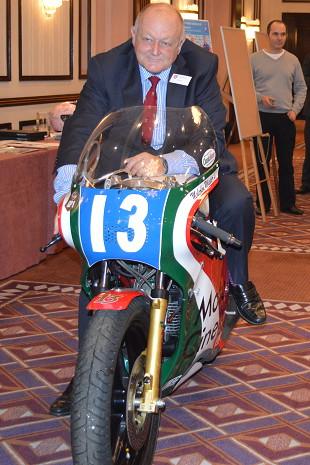 Cleve Brightman provided Malc with the Aermacchi on which he got his first TT podium and the TT2 Laverda which gave Malc a fourth and fifth in subsequent years. Sharing an emotional day was Mick Parrish, a lifetime friend of Malc's and his spannerman for the majority of his racing. Dave Craggs who helped Malc in so many ways when he was competing was there too, plus good friend of 30 years David Stevens, and was also the medic on the helicopter when he crashed at Handley’s.

One of Malc's first jobs in the new role was to accept £8,000 from Geoff Kelly, raised by The Friends of the TTRA, £2000 from Honda TT Legends from the sale of the John McGuinness bodywork, £750 from Nigel Hole of Mortons Media Group raised in its charity auction, and £350 from Rachael Clegg, from the sale of her TT calendar. It is Malcolm's aim to raise money for the charity, but also to spend it… In fact the Association has already spent Geoff’s £8,000, which will make a huge difference to several former TT riders and their families on the run up to Christmas.