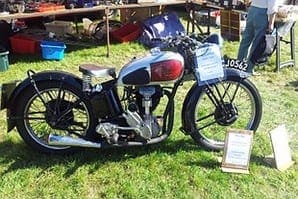 The film, called Grand Prix Racer, has been produced by Isle of Man-based Greenlight TV and was shot before and during the event. The documentary goes behind the scenes of the race meeting and features some of the leading characters and race officials involved.

An hour long version of the documentary will be shown on ITV4 on Tuesday at 8pm and there are also plans to make the programme available to international broadcasters.

A DVD version will be launched on Monday, March 4.

Rob Hurdman, Greenlight TV director and producer of Grand Prix Racer, said: “The documentary will provide an interesting and exciting insight into the Manx Grand Prix and the role it plays in real road racing.

“It provides a close up study of the passion, the commitment and the drama that happens at grass roots racing.”

Manx Motor Cycle Club chairman Harvey Garton said he was confident the documentary would enhance the profile of the event, which has been rebranded as the Isle of Man Festival of Motorcycling in an overhaul of the meeting by the Manx Government for 2013.

“The club is very excited with the quality and content of the programme, produced by Greenlight TV,” he said. “I feel sure that the documentary will enhance the reputation of the Manx Grand Prix and encourage competitors to enter the Manx and whet the appetite of enthusiasts to visit and experience the event.

“We as organisers look forward to welcoming competitors and spectators to the 2013 Manx Grand Prix to help us celebrate our 90th anniversary. Grand Prix Racer gives a great insight for both newcomers planning to participate in the Manx Grand Prix and for the general public to see how much commitment riders give to the challenge of the Mountain Circuit.

“Greenlight TV’s excellent film successfully draws in the viewer so they feel part of an exclusive racing experience and we think the documentary on ITV4 will reach a new audience interested in competing in and visiting the Manx Grand Prix. We are truly delighted that Greenlight has assisted us in showcasing our impressive event.”