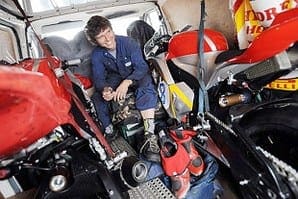 The deal sees a return to the Isle of Man for Team Molnar Manx after a 10 year absence. The team has enjoyed notable success around the Mountain Circuit in the past having won the Senior Classic Manx Grand Prix Races in 2000 with Glen English and 2002 with Richard ‘Milky’ Quayle, when they last competed.

Guy, who starred in the TT3D Closer to the Edge film last year and who appears on Channel 4 television show Building Britain, will contest the event on the latest evolution of the 95-bore Molnar Manx Norton. His team mate Cooper is one of the rising stars of the TT, having achieved his first top 10 finishes during this year’s event and he is tipped as a future winner.

Team Molnar Manx spokesman Andy Molnar said: “We have been encouraged by the classic TT plans and after many years absence are pleased to be returning to compete in the Isle of Man with our latest generation Molnar Manx.

“We are delighted to have secured the services of Guy Martin who is one of the fastest riders ever around the TT Mountain Circuit. He has all the attributes to make best use of our machinery and together we are aiming to be challenging for victory. Daniel Cooper has shown great potential around the Mountain Course already and coming from a successful 125cc background, we feel he has the riding style required to get the best from our machinery.”