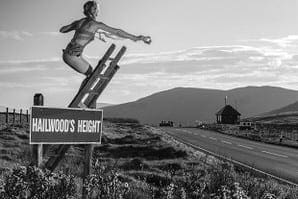 In a moment of madness, Rachael Clegg decided to make her own contribution to the world of nude motoring calendars with one that pays homage to the most challenging event in motorsport – the Isle of Man TT Races.

But it’s not all about flesh. Each image is carefully crafted to interpret an event in the TT’s 107-year history and shot in the same location as the event itself. Consequently, Rachael’s been in a variety of strange poses and guises across the TT course. This fusion of fact and beauty is printed on to 14 leaves of high-end art paper with German, Japanese and Dutch translations. No less a man than Murray Walker said: “For any red-blooded male with an interest in some beautifully illustrated quirky facts about the TT Races and the bare facts of the female form it is a must.”

Rachael’s father, Noel Clegg, and grandfather, Tom Clegg, were both TT racers so Rachael is more than well-acquainted with motorcycle racing.

“I wanted to capture how utterly bonkers the TT is, but also celebrate its quirkiness,” said Rachael. “This is a race, after all, that takes place across 37 and thee quarter miles of public roads. It is, without a doubt, the most challenging event in the motorsport world.”

Indeed making the calendar brought about its own set of dangers. “I have been in A & E twice, almost arrested wearing John McGuinness’ leathers, I’ve been reported on the radio for ‘playing the bagpipes in the nude’ and almost froze to death up a ladder on the highest point of the course. This modelling business isn’t for the faint-hearted.”

The Milestones TT Calendar is available at www.milestonescalendar.com and costs £23.95. Prints from the 2013 and 2014 calendars are also available on the site.