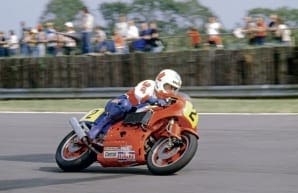 Grant had already decided that, after years in green, it was time for something different – and the Yorkshireman would certainly find out what different meant in Honda’s book.

“Gerald said that this experimental bike was technically going to be absolutely unbelievably advanced,” remembers Grant.

“It sounded very exciting. I expected that the machine would at least start from where the Hondas had finished in 1967. But we got a completely different thing altogether.”

It wasn’t about the money, stresses Grant, some 36 years later.

“Every time the money comes secondary. I just wanted to be a development rider in Honda’s Grand Prix team,” says Grant. “We did settle the money after a proper meeting and it was good.”

In November 1977 the first rumours about Honda’s possible return to Grand Prix racing emerged, 10 years after the Japanese giant had withdrawn from the world’s racing scene, leaving a huge void.

But the competition still piqued the company and Honda wanted to come back – with a bike that had to be different; it had to be a comeback with a bang.