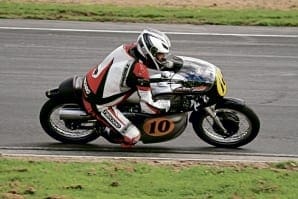 McIntosh: The machines
Lucky boy Terry Stevenson gets to canter the McIntosh Manx.
His other race bike remains a ‘work in progress’, an ex-Norris Farrow twin shock McIntosh Suzuki GSX1100 F1 machine, which won the Bike of the Show award at a recent Auckland motorcycle show.

Many of the external frame components and engine covers have been machined by Morley in his engineering shop and nothing is spared when it comes down to cost, the example being that all the engine bolts are new, giving just a small indication of the extremely high standard that Morley prepares his machines to.