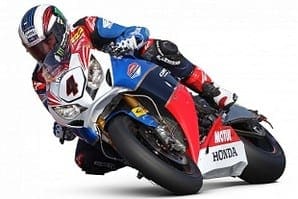 Despite an earlier hailstorm and intermittent showers on the 8.9 mile Northern Irish circuit, the first Superbike practice took place in mainly dry conditions. McGuinness posted an average speed of 119.25mph to place second on the timesheets, while Andrews took the time to better acquaint himself with the lap layout and ended the session in 19th.

Both riders will now take part in the second Superbike practice session on Thursday 17 May before the final grid positions are decided for Saturday’s races.

John McGuinness first took part in the North West 200 in 1994 at what was also his first ever road racing event. He secured his maiden NW200 win in 2000 and has since claimed four further wins around the 8.9 mile course – the most recent being the Superbike victory in 2010. The 17-times Isle of Man TT winner hopes to add to his tally at the 2012 event.

McGuinness's team-mate and 2011 fastest TT newcomer Simon Andrews will be making his race debut at the North West 200. Andrews took part in the practice sessions last year but did not get the opportunity to compete after the Superbike race was cancelled due to severe wet weather. This year, both Honda TT Legends riders are due to take part in the two Superbike races on Saturday 19 May.