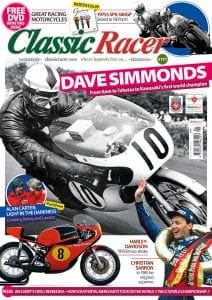 From the Archive
More stunning photographs spanning the classic years of racing. From 22 to 50 years ago via an Italian/Swiss legendary master of the tiddlers.

Subscribe!
Here’s how this great deal works. If you subscribe to Classic Racer you’ll get the magazines for less money than you pay in the shops, you get your issue a few days ahead of it arriving in the shops and you don’t even have to go out to the shops because it’s delivered directly to your door. Win, win, win – you could say.

Readers Write
Your missives on the classic racing world over the past couple of months. Whatever’s on your mind, feel free to write it to a large audience.

Paddock Gossip
Malcolm’s got his ear to the ground and brings you everything that’s relevant and what you need to know about the various corners of various paddocks amidst various locations.

Line Art
This issue’s fine example of the art is Mick Ofield’s wonderfully penned rendition of Mike Hailwood’s 1969 Seeley Mk.3. It’s simple, exquisite and worth taking your time over.

Stroke of genius
The story of Harley-Davidson’s RR500. A short-lived but oh-so-promising two-stroke racing motorcycle that really was something of a technological pointer for other factories to launch from.

Dave Simmonds and the Kawasaki story
Dave was one of the greatest motorcycle racers that this country produced. A family man who was as liked off the bike as he was feared on it, he proved his worth at riding and wielding spanners to eventually give Kawasaki their first world crown. Bruce Cox explains Dave’s contributions and how they fit into the larger story of the Red Tank Racers.

The 750 World Championship
It was a sign of the times that as the new 750s started to emerge in the 1970s, so a series to contest them in should appear. Phil Wain tells the story of how it happened and who grabbed the bull by the horns.

Jim Curry’s CR93
Classic Racer’s Peter Parnham’s journey to get his hands on this lovely bit of racing kit took almost as long to complete as the work on the motorcycle itself. The end result is a great example of the breed.

The Beebees story
How two scrap metal merchants decided to keep a foundation of racing going. Step one, get the machines – step two, go looking for riders. Peter Crawford tells the story.

Sarron: Sacre Bleu
Christian Sarron was one of the big names in 500GP racing at a time when the giants of the sport reigned supreme. On a wet day in 1985 it all came together for the French man in typically Gallic style.

Alan Carter: Light in the Darkness Part 3
Our final instalment of the breath-taking book by Alan Carter. If you’ve not read the book by now, do yourself a favour and get hold of a copy. It’s one of the most honest, revealing, disturbing and enlightening motorcycle race books you’ll ever read. Details of how to get your own copy of the book are included with this article.

1975 Spa Grand Prix
The ups and downs continued for Barry Sheene and a fair proportion of the grid at Spa. What started out as a race amongst equals turned into a war of attrition. Including a particularly hairy seize-up at 180mph!

Radar Part 2: On the roads
The other part of his professional life saw Dave ‘Radar’ Cullen get out on the roads working for the likes of Crosby under the watchful eye (literally) of Pops Yoshimura.

On Track
And so with a bang, not a whimper, the year’s CRMC championship gets underway. Classic Racer’s Graham Lawlor and Russ Lee were on hand for the fun and games.