The Mortons Archive photo (Classic Racer issue 181) of Rod Coleman on Douglas Quay shows my bike, which I have owned since 1995. 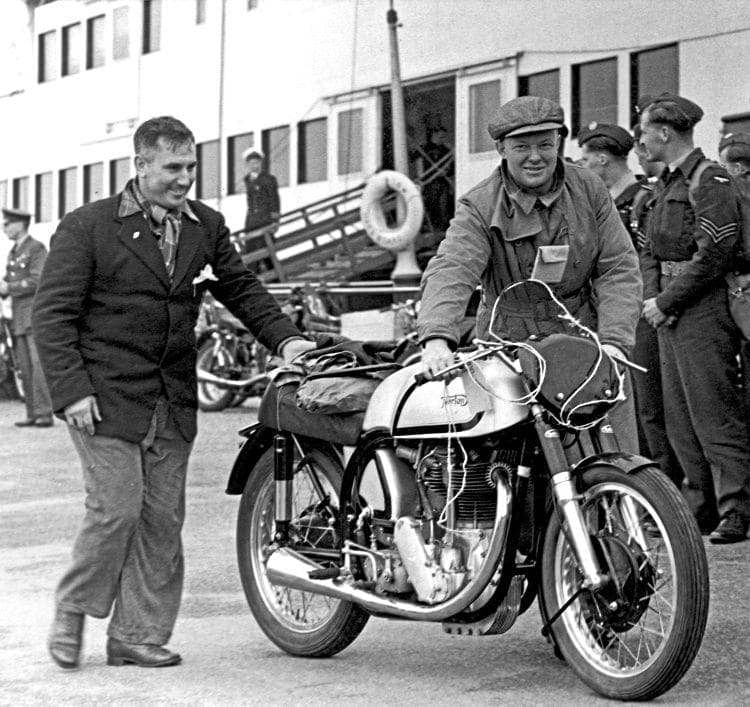 Rod Coleman is shown being helped by fellow Kiwi NZ ACU Team Member Len Perry who also got a brand new Featherbed Manx. They had both been to the IoM before. Len Perry, in 1939 when he rode a brand new Mk.VIII KTT Velo and Rod in 1949 on a new 7R AJS. Unfortunately they both crashed in practice with Len losing a finger and Rod sustaining a broken jaw.

The first 30 Featherbed Manx Nortons were finished in time for the 1951 TT and with a quota going to ‘Colonial’ riders via the various Commonwealth importers, New Zealand was allocated three: Rod a 500 and Len a pair. Rod rode a 7R in the Junior. He said some of the experienced British riders were not happy about missing out. These three 1951 Manx have all survived in NZ.

Rod was fast from the first practice and was up to an incredible fifth on the last lap of the Senior TT when the primary chain broke.

When Rod was researching his book he found his best 1951 lap, just short of 90mph, was the fastest ever by a long-stroke Manx, even though Norton made them for another two years. The bike returned to NZ where Rod won every race he entered. The bike was sold in NZ when Rod returned to the UK where he became a member of the AJS Works Team.

Like nearly every long-stroke Manx in New Zealand, the engine ended up in a Cooper 500 car, but later went back into a bike and was used for beach racing. I collected all the correct bits in the 1990s and restored the bike to the original 1951 specification. Rod rode the bike to another victory at the Assen Centenary in 1998 (where he rode it in 1951).

It has been ridden at nearly every Pukekohe festival since, including twice by Joe Craig’s son Reg and Kevin Schwantz’s dad Jim. The photo shows it in 2009 when my neighbour Roger Bourne rode it at the Pukekohe Festival for the first time. It still has an original Manx piston and conrod I fitted and the only breakage in 20 years has been a gearbox mainshaft. It has only had the head off once.

I asked Rod Coleman when he thought I should replace the old style Hepolite forged piston, and he said he did the whole season of GPs and the TT in 1951 on the one piston, and had the Norton Works do a factory overhaul before it came back to New Zealand, where it won every race. In Rod’s ownership it won every race in NZ. It is a very well behaved motorcycle.

I spoke to Rod last week and he is still going well but complains that at 90 he is lacking the muscle strength to ride a motorcycle!