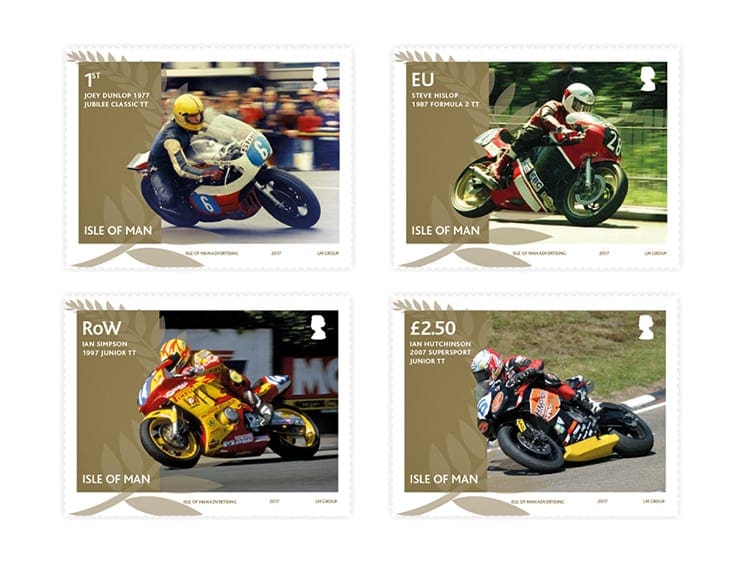 The stamps, designed by local business Isle of Man Advertising and PR, feature photographs of each rider during the race that they took their first win. The TT Winners stamp issue was released on May 26 to coincide with the start of TT fortnight.

The issue is available inside a four-side presentation pack or on a First Day Cover, postmarked with the first day of issue. Both contain additional photography, including pictures taken by legendary road racing photographer Stephen Davison, and the story of each first win written by David Wright, author of six books about the races and a marshal at both the TT and Manx Grand Prix for two decades. They are available in both mint condition and cancelled to order sets.

Maxine Cannon of Isle of Man Stamps and Coins, said: “We couldn’t miss the opportunity to celebrate four important anniversaries falling in the same year. This set is a tribute not only to the achievements of each of these popular racers, but also to the remarkable history of the event, which marks its own 110th anniversary in 2017.”

Ian Hutchinson said: “Winning a TT race is such an incredible feeling, and it is a great honour for my first victory to be featured on a stamp. I’ll never forget the buzz of taking the chequered flag in 2007. To be featured alongside three TT greats has made me really proud.”

Gary Dunlop, Joey’s son, added: “The Jubilee Classic TT, 40 years ago, was the beginning of an incredible success story which saw dad take 26 wins, a record which remains unbroken today. I think it’s brilliant that the Isle of Man Post Office has commemorated his first win like this, it’s a wonderful record of an important day.” TT Winners can be ordered from www.iomstamps.com.