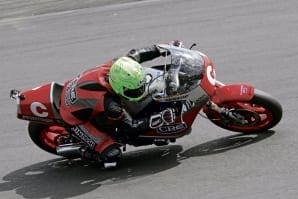 980 was a time when big-bore Formula One racing was catching on worldwide, and the crowds loved it! The bikes were big, made lots of noise and in the right hands they could sometimes take on production GP machines.

Cameron Donald, racing the 25th Anniversary McIntosh to another victory, at Hampton Downs 2015.

It was a time when many aftermarket European frame manufacturers were thriving, with the likes of Harris, Rickman, Egli, Magni, Moto Martin and Bimota all producing frames for large capacity motorcycles.

And for more than half a decade New Zealand-built and Suzuki-powered McIntosh Formula One race bikes were at the top of their sport.

In the early 1980s there was nothing else available in NZ road racing other than ageing Yamaha TZ750s and the odd Suzuki RG500 to race in the premier class.

There was a demand for quality race frames to fit around modified road bike engines, and Ken McIntosh helped fill the grid with race-winning motorcycles.