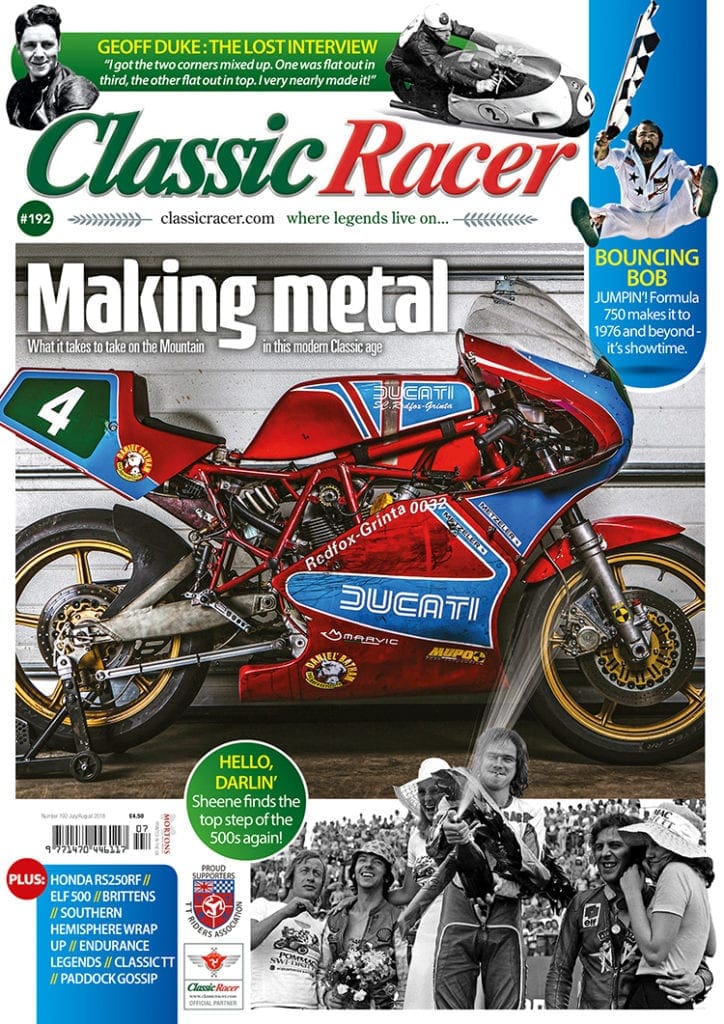 Archive joy
Three moments from racing history deserving of your time, to take in fully and appreciate. Big images early on – what CR is about.
Subscribe
We’re always looking for ways to appeal to potential subscribers and we often point out that if you subscribe you can get the magazine before it hits the shops – and for a bit less money too. In truth, we hope that you enjoy Classic Racer enough to subscribe but we’re very happy if you’ve bought it elsewhere too.
Readers Write
Two months have passed since we saw you last and there’s been quite a bit going on. Here’s a good place to vent or reminisce in a family-friendly way.
Paddock Gossip
Malc’s been out and about gathering the interesting stories from the classic racing world. Here’s his pick of the most important things to know.
Line Art
In 1991 the quarter-litre motorcycle to be on was the Honda RS250 and this issue of CR brings you more exquisite art from the pen of Mick Ofield that isolates the lines of this mini-masterpiece.
The ELF V4 500. Scary
It stood alone as a particular monster at the time, one of the most difficult motorcycles there has ever been to go fast on. Forward thinking engineering or a huge blip in the long history of 500GP bikes?
Geoff Duke: The Lost Interview
An eye-opening, tell-all from the late Geoff Duke in an interview that until recently was thought lost. One lucky find gives us the thoughts of the great man for one last, fresh, time.
Rutter’s Classic Ducati
Jan De Vos is the man behind the Redfox Grinta Ducati that powered Michael Rutter around the Mountain Course last year. Classic Racer sidelined the bike for a clothes-off look at what makes a motorcycle like this move so fast.
The Brittens
Terry Stevenson takes a look at the story and the legacy of one of the most interesting motorcycle concepts of all time, and why it’s endured with such a unique sector of racing reverence amongst racing fans.
Legends line up
Randy and the Trailblazers might sound like a brilliant name for a rock and roll MotoGP band but the truth of the matter is that both have had a pretty incredible couple of months. One became a bona fide legend nonetheless.
Formula 750. When the big guns came out
Part two of Phil Wain’s appreciation of the big class in the 1970s that drew big crowds, big names and big money. Nothing small about the Formula 750s or the superstars who enjoyed them.
066 The 1975 Swedish 500 Grand Prix
Barry Sheene goes out in search of his second top of the podium in the premier class. Anderstorp always was good for an extra bit of drama in the 500cc world.
‘Dahn under, cobba’
A review of the classic scene in the southern hemisphere by Classic Racer’s Hamish Cooper. Lots of action and some huge events keep the fans happy and the racing furiously close.
On Track
Endurance Legends, CRMC and BHR action from various outings over the past two months.