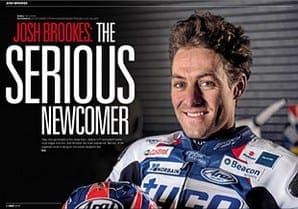 Same venue as originally planned, namely at WHSmith in Strand Street, Douglas, IoM. Come and meet the hard charging Aussie Josh Brookes, get your photo taken with him and take away a unique signed memento of this year's fabulous TT.

In our special Island Racer 2013 TT guide, we have an seven page interview with Josh, and find out what drives him to push and ride harder than the other guys.

Island Racer is THE best Isle of Man TT resource. All the stories, dates and star interviews, plus this issue comes with a free Duke DVD, worth £16.99. A signed copy will make the Island event a treasured memory.

Island Racer 2013 contents:
Flag down
We start things off with the usual terrific images and stories that tell the true, human nature of the Isle of Man TT. There’s so much more to the TT than just the riding fast part, as our opening salvo of top images shows.

Who's who
All the main players take to the line for their parts in this year’s Isle of Man TT show. Here’s how they square up in their respective classes. All you need to know, really. Handy.

It happened there: 2012
Last year will be etched in the annals of TT history for ever. Not just because the weather did for The Senior for the first time in the event’s 105 year history but also because we saw proof – as if any were needed – that one chap called John is as hungry and faster than he’s ever been before. 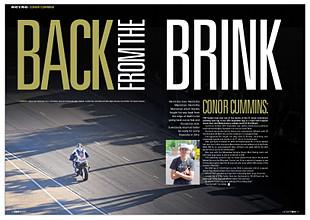 Conor Cummins
For 2013 Cummins finds himself on the Milwaukee Yamaha machine under the watchful eye of team boss Shaun Muir. The past couple of years have been dogged by injury and the recovery from injury but don’t let that fool you. Cummins is a stunningly good prospect and has bagged more 131mph+ laps than anyone on The Island. The Manxman’s time has come.


The real Guy Martin according to his folks
You’ve seen him riding bikes, you’ve seen him on TV, you’ve probably seen him dashing through the TT paddock with a cup of tea in one hand and course notes scrunched up in the other. But no matter what people might think of Guy Martin there’s nobody on the planet who knows the real man behind the sideburns like his parents. And just like their boy, they don’t hold back in telling the truth about things. Like whether or not their lad will ever get that first victory on The Island.

Behold: the best
It’s one thing focusing on the rider, it’s another to get to peer into the inner-workings of what makes a TT-contesting superbike. The dark art of the engineer combined with the brain of the mechanic, the tyre man, the team boss and the rider on show. Tyco Suzuki’s awesome superbike gets naked.

McGuinness: how much more?
It’s a question that’s being asked, but it doesn’t seem like many people have the chops to ask the man directly. So IR sat down with McG for a chat about where he’s finding the motivation to keep going at this pace and how much more he feels there is to come.

Cam Donald
So fast. So very fast. So why hasn’t he won more? One slip in Practice Week a couple of years ago ended up costing Cam dear. By his own admission he knows he can’t let years pass by when the competition is so tough. So here he is, proper focused and up for it.

From hero to zero
Mention MotoCsysz and it won’t be long before people are telling you about how awesome they are on The Island. A 104mph+ lap of the TT Mountain course in the hands of Michael Rutter last year kind of tells you all you need to know about where the electric world is at the moment. Here’s the inside line on how they do it.

Josh Brookes: now it's on
It’s fair to say that the Aussie is obsessed with racing at the TT. He’s studied it for years and had it written into his short-circuit contract for this year. Brookes the battler, Brookes the brave and Brookes the no-bullshit bike racer. 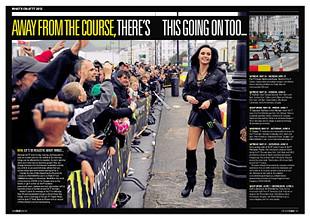 TT 2013: the watcher's guide
We know that the TT can be daunting, just because of the size of the course itself. So it’s mighty useful to have a guide showing you the best places to watch from as a punter. Voilà.

Bomber Harris
He’s built like a brick outhouse and he’s fast. Getting faster all the time. Karl Harris is typical of the new wave of British bike racers who see the TT as a vital a part of their racing lives as short circuit racing in front of the TV cameras every weekend.

And now for the future generations… the Manx GP
What a time of great change for the Manx we’ve had recently. This event, for so long a feeder class for the TT, has been revamped and remodelled to many different points of view from various corners of the racing world. Here’s the story of what’s happened and what’s planned for the future of this vital element of Island racing.

What's on
Everything you need to know for a brilliant time at the TT fortnight. Race times, and important events on and off the Mountain Course.