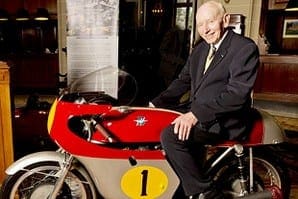 The special event in Surtees' home town will feature static displays and a parade of rarely seen race cars and bikes as well as veteran and classic vehicles along Edenbridge High Street. The Edenbridge Fun Day will raise awareness and funds for the Henry Surtees Foundation which was established by John Surtees following the tragic death of his son Henry while competing in Formula 2 race in 2009 aged just 18. The Henry Surtees Foundation aims to give young people from the community at large opportunities to experience the emotion, disciplines and learning that the world of motor sport offers.

The Team Surtees and John Surtees related vehicles taking part in the Edenbridge Fun Day and parade will include:
• A TS7 Formula 1 car which John Surtees raced at the British Grand Prix in Brands Hatch in 1970. John Surtees will drive it.
• The TS14 Formula 1 car which Mike Hailwood drove to second place in the 1972 Italian Grand Prix. It will be driven by McLaren Formula 1 team reserve driver Oliver Turvey.
• The TS15 2-litre Formula 2 car which won the prestigious Interlagos race in Brazil in 1973. Past Formula 3 British Champion and A1 Grand Prix runner-up Robbie Kerr will drive it.
• A 1960 MV Agusta four-cylinder GP motorcycle – John Surtees won seven motorcycle championships riding for MV Augusta.
• A 1954 BMW Rennsport twin-cylinder motorcycle – John Surtees raced for the factory team at the Nurburgring in 1955. Engineers associated with John Surtees’ career on two wheels will ride the motorcycles.

The vehicles will be displayed throughout the day outside the Bradford shop, Station Road, where they were built and designed by predominantly local residents.