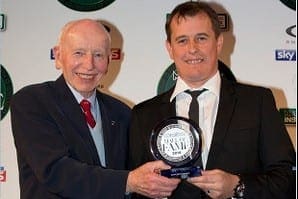 The 'Morecambe Missile', twenty time Isle of Man TT race winner, was fresh back from his first race of the year in Australia and became only the third motorcyclist to join the illustrious Hall of Fame club. In 2012 both John Surtees and Giacomo Agostini were inducted and it was the former who was on hand to present McGuinness with his trophy.

“I’m nearly 42 and I look pretty average,” McGuinness said, “but in my head I feel pretty good. I’ll carry on for one or two more years yet. I felt a bit nervous to be honest, there are so many champions on four wheels and two, but to see my name up there with the greats is a massive honour.”

The evening also featured an auction in aid of the Grand Prix Mechanics Charitable Trust in association with RM Auctions, which raised £23,000 for the Trust.

You can meet John Surtees at the 34th Carole Nash International Classic MotorCycle show, as he is our Guest of Honour for the event, held over the weekend of April 26-27.