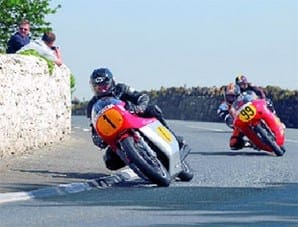 Alan Oversby was on a new three-cylinder 500cc replica built specially by its owners, Dave and Mark Kay, for this year’s Manx Grand Prix.

“The Pre-TT is a great meeting and a good opportunity to test the bike for the Manx,” said the 54-year-old fabricator/welder from Bolton-le-Sands.

“The 500 race went to plan, managing to get pole position. As the bike is new, suspension and other settings had to be set in practice, but it seems to be very strong and reliable.”

Four decades on from the last of Giacomo Agostini’s runaway doubles on the Mountain Course, modern day MV pilot Oversby was made to work considerably harder for his two wins on the short, but demanding 4.25-mile Billown Course on the outskirts of Castletown.

Roy Richardson rode well on Dick Linton’s pushrod Aermacchi and even managed to record the fastest lap of the 500cc Senior race, but ultimately Oversby took the win by 5.566 seconds after 34 miles of racing.

The MV was about last to leave the holding area for the single lap warm-up and was sluggish away from the official start, giving Richardson chance to get on equal terms as he had only qualified on row six after problems in practice.

At the end of the opening lap the two were separated by half-a-second in Richardson’s favour, with local man Chris Palmer one second down in third on the Ripley Land G50.

Oversby powered ahead in the early stages of lap two, but Richardson nipped through on the inside at Cross Four Ways.

The power of the triple soon got Oversby back in front and he was one tenth of a second in front at quarter-distance.

Ed Manley Jnr (G50) took a tumble at Cross Four Ways to join a rapidly growing list of retirements alongside Alan ‘Bud’ Jackson (Norton) at Iron Gate, Ulsterman Barry Davidson (Drixton Honda) at the pits and Bob Owen (Seeley) at Church Bends. Richardson had another stab at Oversby on the inside at Cross Four Ways and this time he managed to make it stick, leading by 0.3 of a second at the end of lap three.

Brew was having problems with his G50 and retired at Ballakeighan, while fellow top-10 man Steve Elliott went out on the same lap. It was Oversby’s turn to lead at half-distance, by an extended seven tenths of a second, with three-time winner Palmer slipping out of contention some 14 seconds down in third.

Richardson was riding the wheels off the Aermacchi and each time he took the right-hander round the cottage at Cross Four Ways he attempted the tight line.

It rarely worked and the effort seemed almost futile as, nine times out of 10, Oversby’s MV got him back on the exit.

At three-quarter distance, after the fastest lap of the race by both of the leading men, the gap was still four tenths of a second in Oversby’s favour.

“I was all over Alan on the twisty bits and I outbraked him most laps into Cross Four Ways and once into Castletown Corner. The misfire might have been down to a shortage of fuel in the final few miles,” he suggested.

Oversby admitted that his rival was faster on the technical bits of the course. “The Aermacchi is a lot lighter than the MV and better into the tight corners,” he added. It was Oversby’s fourth Senior Classic win in the Pre-TT event, his second on the MV.

Chris Palmer reported a fault with his G50’s rev counter: “It’s only showing 6500rpm. It caused me to hesitate briefly, but I couldn’t have stuck with them.”

Fourth place went to comparative youngster Jamie Coward of Hebden Bridge on the Fenna Honda, while a brace of Drixton Hondas filled out the top six in the hands of Dave Madsen-Mygdal and Steve Ferguson.

Easier ride
Oversby had a considerably easier time of it in the 850cc event. A late addition to the programme, it looked for a while like being a carbon-copy of the earlier 500cc race with Richardson again providing the main opposition on the Aermacchi. The pair were side-by-side at the end of the opening circuit and, after two laps, it was Oversby by 0.49 of a second.

At half-distance, the lead had extended to 2.9 seconds but Richardson stopped at Great Meadow next time round. The focus of attention switched briefly to the battle for second place between Paul Coward (Fenna Honda) and Chris Palmer, however the latter man was soon looking down at the G50 and he was out after six laps.

Oversby’s lead grew to 40 seconds with two laps remaining and by the end that had pushed it out to 53.513 seconds with a class lap record of 93.797mph to boot. Runner-up, Paul Coward, admitted it had been ding-dong with Chris Palmer. “I’ve worked non-stop to get the Honda twin ready, but it’s not quite an MV,” he smiled.

Kingsley’s Steve Elliott had no idea he was third. “My tackle almost fell off,” he laughed. “We changed the engine in the dinner break. I’m tingling all over as I had no rev counter.”

Alec Whitwell had another good ride on the 850 Bates Honda, while locals Allan Brew and Chris McGahan completed the top six. McGahan had to stop on the first lap as the tank strap came undone on Norman Miles’s Trident – affectionately known as the ‘Old Girl’.

Tight lightweight
Ewan Hamilton caught Tom Jackson napping in the thrilling final stages of the 250cc Lightweight race. The wily Scot was just six-100ths of a second in front of determined Cumbrian Jackson at the end of the first circuit, Tom in turn two seconds clear of the Yamaha TD1C of Dave Edwards.

Extended to one-tenth of a second next time round, Jackson came out of Hamilton’s slipstream to lead by six tenths of a second after three laps.

Hamilton was back in front one lap later, as Chris McGahan retired Bob Taylor’s Kawasaki A1R with a broken clutch cable.

The lead remained at two-tenths of a second for the next couple of laps until Hamilton pulled to the side of the road to retire with a dead motor, only for it to chime back in on both cylinders.

Jackson, believing his rival had quit, eased back the throttle when his lead stretched out to six seconds, but he was ultimately caught napping on the final circuit when Hamilton fired past.

Producing the fastest lap of the race on the final circuit of 83.462mph, Hamilton fired past a surprised Jackson and went on to win by 3.6 seconds. Hamilton, still suffering problems with a wrist he fractured early in 2011, admitted that he thought his race was over on lap six when the engine died exiting Cross Four Ways. “I pulled into the side of the road and as I virtually came to a halt it suddenly fired up again.”

Jackson said that most of his problem was down to old age. “I couldn’t keep the throttle open, I had to put my thumb on the grip,” he revealed, adding, “I had no idea that Ewan was behind me in the closing stages. I was taking things easy as I’d run out of front brake.”

Final podium finisher Edwards was almost 12 seconds adrift, with Peter Wakefield fourth for the third time on his 250 Suzuki.

Flying Swallow
Having migrated to New Zealand for some racing over the winter, Bill Swallow returned to win the 350cc Singles event on the opening day of racing at a sun-kissed Billown. In doing so, he drew level with old rival Bob Heath on a record tally of 15 Pre-TT Classic wins.

Having trailed Blackpool’s Roy Richardson for virtually the entire distance, Swallow was handed the win when Richardson’s Linton Aermacchi slowed and eventually stopped halfway round the sixth and final circuit.

He was six seconds clear of a three-way tussle for the number two spot after a single circuit, Bill Swallow eventually taking this position by a clear margin following the late retirement of Mike Hose on the two-stroke Bultaco TSS.

His departure left the door open for Chris McGahan to grab the final place on the podium with a late charge on Bob the Builder’s Honda twin, pipping Steve Elliott in the closing stages
Jim Snaith of Silloth won the six-lap support race from David Hebb and Gordon Morss after early pacesetters Marek Wieckowski and Keith Shannon retired.

Eddy Wright and Neil Wheatley drove their Imp-engined outfit to victory in the six lap sidecar event after a thrilling scrap with the BMW flat-twin of Nick Houghton and Paul Thomas ended on the penultimate lap.

Of the increased number of 16 crews that started, nine completed the full distance but the race was a close fought thing for the opening half with split seconds covering the leading outfits.

Houghton and Thomas led by half-a-second at the end of lap one, but Wright and Wheatley had turned it around to lead by a similar margin after two circuits.

The pair were still neck-and-neck going into the fourth lap, but when Wright’s Imp edged back in front of the BMW a lap later it was the beginning of the end for Houghton and Thomas who retired at Ballabeg Hairpin, having also failed when leading 12 months earlier.

The York pairing of Wright and Wheatley won by a huge margin of 1min 25.583sec from locals Eddy Toombs and Bob Dowty on the 980 BMW, with Lenny Pallister and Ian Marriner nursing their 850 Triumph Special home third with a problematic gearbox.

Ride of the meeting
Jamie Coward produced one of the rides of the meeting to push Guy Martin every inch of the way in the Post-Classic Superbike race.

Ultimately, it was the more experienced figure of Martin who cracked when he tangled with backmarkers at Cross Four Ways on the final lap and dropped the Trident Engineering XR69.

Coward was on Martin’s case from the word go and despite the TT star getting the initial drag on him, the young Yorkshireman refused to let him get away from the GSXR750 he purchased on eBay.

Martin held onto the lead with the 1981 works replica 997cc Suzuki for the first six miles, but Coward was ahead by the time they reached the sight of commentator Charlie Williams at Cross Four Ways on lap two.

Coward held on for the next two circuits until Martin snatched it back at the end of lap five by one-thousandth of a second. But a determined Coward was not giving in and he grabbed the initiative with two to go.

He was still hanging on by one-tenth of a second with a circuit remaining and the pair came into Cross Four Ways for the final time still neck-and-neck.

Coward managed to outbrake a couple of backmarkers into the first gear right-hander, but Martin – in a desperate final attempt to go up the inside – tangled with one of the lapped riders and went down.

“I missed a gear on lap five and Guy got past me,” said the Hebden Bridge flyer. “I left my braking as late as I possibly could so he couldn’t show a wheel. The bike’s not bad for £600, all I did this year was brush the cobwebs off it and put some fuel in!”

Chris Palmer finished second on Rob Brew’s TZ250 Yamaha, winning the under 350cc class from Roy Richardson who’d attempted to creep up on his rival in the closing miles.

Chris McGahan had another late run to finish fourth on the road and second Superbike on the Trident, with the 250 Yamaha of Ulsterman Brian Mateer fifth and Manchester’s Anthony Redmond next of the big four-strokes on a 900 Honda he’d converted from a road bike in three weeks.