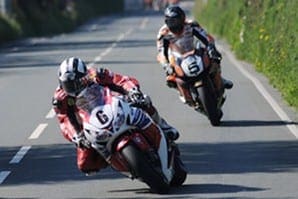 After the initial race was red flagged due to an incident at Bray Hill involving rider Jonathan Howarth in which ten spectators were injured, the race got underway at 4.30pm and the first few laps were nothing short of superb as the gaps between the leading riders were minimal. It was Gary Johnson who grabbed the lead at Glen Helen by 0.5s from William Dunlop with Michael Dunlop just 0.05s further back! Michael Rutter slotted into fourth as McGuinness found himself down in fifth.

It was all change at Ramsey though as Michael Dunlop hit the front for the first time, Johnson now second and McGuinness third. At the end of the lap, the order was still with the first five riders all over 130mph and only seven seconds between them, Dunlop leading from McGuinness, Johnson, Rutter and Guy Martin.

McGuinness began to make his move on the second lap and, after edging ahead by just five hundredths of a second at Ballaugh, he completed his second lap at 131.272mph to open up a 2.4s lead. Dunlop was 4.8s ahead of Martin with Bruce Anstey up to fourth and ahead of Rutter as Johnson was forced to retire with a broken foot assembly.

Another slick pit stop by McGuinness’ Honda TT Legends crew saw him leave the pits with a bigger lead but by Glen Helen the gap was down to half a second although McGuinness had doubled this by Ramsey. It was nip and tuck all the way and at half race distance there was two seconds between the duo, Anstey in third ahead of Martin and Hillier, who had relegated Rutter to sixth.

On the fourth lap, McGuiness appeared to have broken Dunlop slightly and, for the first time, his lead increased the whole way round. Leading on the road with Hillier right in his wheeltracks, the pair lapped at over 131mph as they came into their second pit stop and whilst it allowed McGuinness to go seven seconds clear of Dunlop, it also allowed Hillier to not only move up to fourth but also close up on Anstey.

Fifth time around and McGuinness’ lead crept up to the ten second mark, Hillier continued to have a great education behind the current King of the Mountain whilst the thousands of fans around the track were also being treated to an on-track duel between Anstey and Donald. McGuinness and Dunlop looked safe but third place was anyone’s and as the riders headed into their sixth and final lap, Hillier had nosed ahead albeit by the tiny margin of 0.16s!

The final lap saw the leading four riders all lap in excess of 131mph, Hillier and Anstey both setting personal best laps, but it was McGuinness who was celebrating the most as he took his 20th TT win, and his 41st podium, by 10.1s. Dunlop ended his phenomenal week with a second place and, in a thrilling last lap, Anstey set the fastest lap of the race, 131.531mph, to get the better of Hillier for third.

The race was delayed by 3½ hours following the incident on Bray Hill. The Race organisers issued the following statement: "ACU Events Ltd can confirm that 10 spectators were injured during an incident in the Senior TT Race. The rider Jonathan Howarth sustained a minor fracture. The race was red flagged and emergency services were immediately in attendance at the scene.

"The ten spectators and the rider were taken to hospital with injuries ranging from slight to serious but not life threatening. Four of the spectators have been discharged, five of the injured have been kept in hospital and one remains under observation in the emergency department."