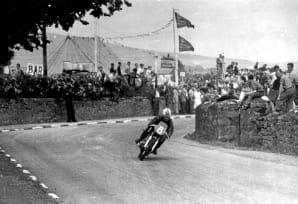 As a result of a double win at the Manx, the club members decided there should be a race in the south of the Island and to hold a meeting on what was to become known as the Billown circuit.

In the early 1950s, the Isle of Man government decided to build a bypass to avoid the town centre of Castletown, and while traffic was minimal compared with today’s motorised Island, the bypass provided an integral part of the new course.

The first meetings to set up the organisation were held in the Station Hotel, now the Viking, in Castletown, which is where the Ennett family lived.

This band of gentlemen with foresight also used to meet on a Sunday morning in the control tower at Ronaldsway Airport, with Theo Watterson.

In between landing planes, the time was taken up planning the Southern ‘100’.