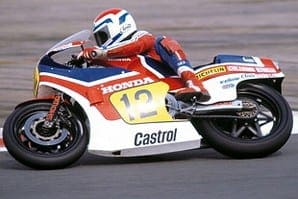 The American will ride his 1987 500cc three cylinder Rothmans Honda that he is currently parading in Europe at the Festival of Jurby on August 25 and again in the Classic Racer magazine lap of honour on Monday August 26.

He will also be a guest in the official VIP Hospitality Club and will host a table at the Classic TT Legends Dinner on the evening of August 25.

'Fast Freddie' first came to prominence in 1978, winning the 250cc US National Road Racing Championship and gained international recognition at the 1980 US versus Britain Trans-Atlantic Match races when he won two legs, defeating world champions Kenny Roberts and Barry Sheene in the process.

He was promoted to Honda's Grand Prix team in 1982 and in 1983 he won his first 500cc world championship at the age of 21, becoming the youngest person to win the title, a distinction previously held by Mike Hailwood.

The 1983 season is remembered as one of the most dramatic title chases in the history of Grand Prix racing; Honda's Spencer and Yamaha's Kenny Roberts fighting for the points lead throughout the championship with each of them earning six victories. The season culminated at the penultimate round in Sweden when Roberts ran off the track on the last lap leaving Spencer to sprint to the finish line and victory. Roberts won the last race but Spencer finished second, securing his first world title by two points.

Teething problems with Honda's radically new V4 NSR500 coupled with injuries from crashes hindered Spencer's title defence in 1984 but 1985 proved to be an historic year for him. He won both the 250cc and 500cc GP championships, the last rider to achieve such a feat. His career was cut short by wrist injuries and he retired from Grand Prix racing at the beginning of 1988.

To book tickets for the Classic TT Legends Dinner, Platinum or VIP Hospitality or for more information visit www.iomtt.com