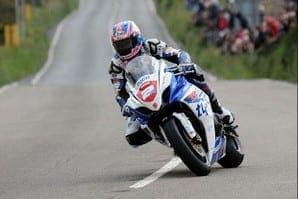 Josh fell in love with the Isle of Man TT Mountain Circuit on his first visit back in 2009, but having sampled the atmosphere in and around the TAS Racing camp during TT race week in 2011 and 2012, and participated in parade laps on the Mountain Course, the Australian now feels the time is right to add his name to the entry list.

Speaking from his New South Wales home, he said: “I’m glad it’s out in the open now as all the question about whether I was going to ride or not – and not being able to say anything – was getting a bit tiring.

“Since making the decision I’ve taken in some reconnaissance trips and spoken to a number of influential people. I fell in love with the place on my first visit back in 2009 and now that I’m with what I regard as the best team at the event in Tyco Suzuki – it gives me peace of mind. It’s too early to be setting any goals. It’s the beginning of a new project and we’ll just see how it goes.”

Team manager Philip Neill said: “As a team with a strong background in pure road racing I suppose it was inevitable that Josh would like to have a go at the TT. He’s one of the highest profile newcomers to come to the TT in recent years, but I know it's not a spur of the moment idea – he has given it careful consideration. We won’t be expecting any miracle results and there is certainly no pressure on him. Our job is to use our experience and guide him to our best ability, but Josh is a sensible lad.”