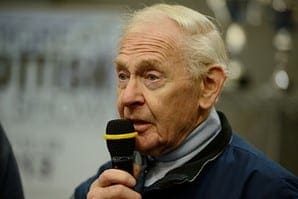 • Sammy at Thundersprint
Evergreen Sammy Miller will be joining fellow veteran Jim Redman at this year’s Thundersprint, which moves for the first time to Anglesey, on April 21. Sammy will ride his RC181 Honda replica and the museum’s supercharged 1938 AJS V4.

• New from Dymag
Iconic British motorcycle wheel brand Dymag has launched its lightest ever forged aluminium wheel, developed for both race and road use.

The UP7X is an evolution of the successful Dymag UP7 forged aluminium wheel and is designed to give an edge on the track with lower weight and therefore lower inertia. The wheels feature a reworked style, with modified spoke shape and rim design.

• Sidecars celebrate 50 at Southern
The Steam Packet Southern 100 International Road Races reach another milestone in 2013, 50 years of sidecar racing on the Billown course.

The three wheelers were added in 1955, seven years after the first Southern 100. Charlie Freeman and Fred Wallis disputed the lead during the nine lap race, with Freeman taking victory by just one second.

Between 1989 and 1995 two Sidecar Championship categories were held, Open and Formula 2, with the Open class being dropped for safety reasons, in 1996. Current champions are brothers Ben and Tom Birchall, who took the prestigious title on their debut in 2012.

• Bob Brewer 1930-2013
The founder of B & C Express, supplier of road and racing motorcycle equipment, Robert ‘Bob’ Brewer passed away in February, aged 83.

From small beginnings Bob, with his son Robert working alongside him, built a successful business alongside the family home in Potterhanworth, Lincolnshire.

Bob was always passionate about motorcycle racing and helped a number of riders over the years, notably the late Pete Hubbard, who went on to national stardom. Robert junior also had a successful race career, supported by Bob, before retiring to concentrate on the business. When Bob eventually retired Robert’s wife Theresa joined the business.

Tickets cost £50 each and include dinner, at the Gosforth Park Hotel, Newcastle, a raffle and auction, with great prizes from the world of MotoGP and BSB, all to raise funds for Riders for Health.

To book tickets or get more information go to www.classicbikenights.co.uk or call Chris Berriman on 07930 385396 chris.berriman@meritpe.co.uk