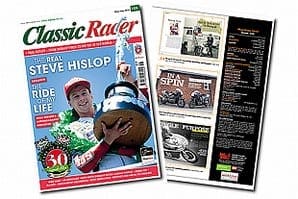 In this special issue, a seven-page feature on Steve 'Hizzy' Hislop, 11-time Isle of Man TT winner, British 250cc Champion and double British Superbike Champion. This is the real Steve, by his team manager Rob McElnea, rival Niall Mackenzie, Kelly Bailey, partner and mother to his two boys and Paul Bird who resurrected the final stages of Steve's career. A compelling read…

Also in the latest Classic Racer, Steve Rose meets a man who was part of the Norton rotary race effort revival and admires the bikes which look just as good as they did a decade on, a fire-breathing Moto Martin Kawasaki tested by Alan Cathcart, Moto Morini's amazing 250cc singles and a review of Mick Walker's autobiography. Mick, who had a passion for motorcycling in general and all things Italian specifically, sadly passed away 24 hours before the first copy arrived off the press. Here we share some snippets, which tells the story of a life lived to the full.

Other articles include a profile on Paul Butler, who has worn virtually every hat imaginable,  Eighties race privateer Mak Salle, who could take on, and beat, the factory Suzukis, Hondas and Yamahas and a pictorial tribute to short circuit star and TT ace Derek Minter.