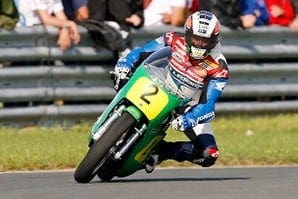 The 19 time TT race winner is teaming up with sponsor Roger Winfield to ride a BIC Paton machine in the 500cc Classic TT Race in the inaugural 2013 Classic TT Races as part of the Manx Grand Prix Festival.

Earlier this month, Michael Dunlop and Conor Cummins signed up to participate in the races for Team Classic Suzuki and before them works Suzuki TT star Guy Martin and former British champion and up and coming TT star Daniel Cooper announced their commitment to the event.

Undoubtedly the greatest TT rider of his generation, John McGuinness is the second most successful rider in TT history with 19 victories, two of which came during the 2012 event.

The current TT Mountain Course outright lap record holder was the first man to lap the circuit at 128, 129, 130 and 131mph and has remained unbeaten on a superbike at the TT in nine years. Event organisers have said that his support for the Classic TT is a major boost for the event in its inaugural year.

Speaking about the plans announced at the Motorcycle Live event at Birmingham’s NEC, John said: “Ever since the Classic TT concept was announced I have wanted to get involved and support the organisers with this exciting new idea. I love the Isle of Man and I love riding a bike around the TT Mountain Course, so getting the chance to do it on a really special classic bike is a dream come true.

“I've already had a little run out on the bike just for a bit of fun at the Festival of Jurby during this year’s Manx Grand Prix and straight away I was impressed by how good it was to ride. Roger is a fantastic guy to work with and when he invited me to ride the bike at the Classic TT it was an easy decision to make.

“I watched Ryan on the bike during this year’s Manx, and he looked incredible on it. The machine sounded really good as well and you could hear it for miles and miles after he had gone past.”

Roger said: “I’m delighted that John has agreed to ride the bike for us in the Classic TT. It is a real honour for our team to be working with one of the greatest TT riders of all time. Ryan Farquhar did a terrific job for us on the bike over the past few years, and when he retired we had to replace him with a rider of the highest calibre and there is nobody better than John McGuinness to take over the reins.”