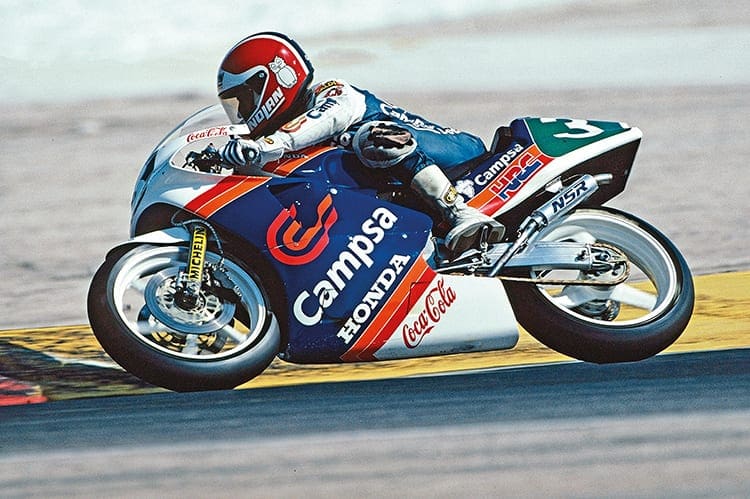 Whereas until then Spanish riders like Angel Nieto, Benjamin Grau and Ricardo Tormo had essentially only tasted success in the 50/125cc ‘tiddler’ classes (okay, we haven’t forgotten Santi Herrero and the 250 monocoque Ossa, but he was the exception rather than the rule – and you can see that bike represented in exquisite detail on page 22 of this very issue). And with those smaller classes primarily contested by diminutive Latins, the new wave of Spanish riders came to dominate the 250GP category which had much more widespread global appeal. Pons had to contend not only with his bellicose Yamaha-mounted home-town rival Juan Garriga, both in 250GP and after both of them moved up to the 500cc category in 1990, but also with men like Carlos Cardus, Alex Criville, Alberto Puig and Dani Amatrain as the leaders of the new wave in Spanish GP racing.

But while the first of Pons’ two world titles in 1988 came after a ferocious season-long scrap with Garriga, who finished second in the table just 10 points behind, 1989 saw the former architectural student dominate the series, wrapping up the championship title three races early after winning seven GPs out of 15. In that season Pons finished every race no lower than fourth which led to a lead of 72 points over runner-up Reinhold Roth on a similar Honda. You might say he dominated the season and the reason for such domination is simple: Sito not only had to contend with the surprising early-season competitiveness of the revamped YZR250 Yamaha V-twin – redesigned for 1989 in singlecrank form, like its Honda rival – and the awesome talent of John Kocinski who won two out of the year’s first three GPs, but a phalanx of other Honda riders mounted on machines that outwardly at least, were identical to his own.

As the season progressed, and Honda intensified development after being beaten by the new Yamahas in three out of the first four races, the challenge to the Spanish reigning champion came exclusively from his fellow Honda riders: the sight of a sextet of Hondas battling for victory became commonplace. One reason for Pons’ reign was obviously Sito’s belief in himself after winning the title for the first time in 1988. Retaining a championship can sometimes be even harder than winning it for the first time, but in this case the No.1 plate gave Pons an extra aura of invincibility, which his finely-honed racecraft exploited to the full. The sight of championship runner-up Reinhold Roth in tears on the Rijeka rostrum summed it all up, after being outfoxed yet again by the Spanish ace in the last lap run to the flag: “Won’t you at least let me win one race?” he asked.

HRC certainly helped fuel this supremacy by giving Sito maximum support throughout the season, especially after Yamaha threatened to win back the 250GP title after the first four races. There’s little doubt that Japanese rider Masahiro Shimizu performed a little-known but vital development role in this respect, testing new components and engine settings in early qualifying that were incorporated in Sito’s bike for final practice and the race if they worked, even to the point of the Japanese rider’s engine being fitted in Sito’s bike for race day, if considered desirable. Finally, as in 1988, the influence of Antonio Cobas can’t be overestimated. The Spanish designer found time from his own team’s successful assault on the world 125 title (in which his rider Alex Criville ironically defeated both works Hondas to win the championship!) to work his technical wizardry on the chassis of Sito’s bike. With the best engine, the best chassis set-up and the best rider, is it any wonder that the Campsa Honda team retained its world title in 1989?

The why
In attempting to duplicate Spencer’s hard-fought 1985 world championship victory on the unique NSR250, Honda got badly blindsided in 1986 by the total dominance of Carlos Lavado on the Yamaha YZR250, who won six GP races en route to the title. As HRC director and Honda GP boss Yoichi Oguma told me when I tested Shimizu’s bike at Suzuka, Honda had made the mistake of completely redesigning the internals of the engine compared to Freddie Spencer’s unique title-winner from the year before. “We should have had confidence in our existing development skills, not done so much work on redesigning a proven winner,” he said.

So for 1987 the third-generation machine contained no major design changes, only a host of small improvements and tweaks which together resulted in a Formula Honda steamroller – Honda riders taking the first five places in a world championship table topped by wily West German veteran Toni Mang. It looked like it was going to be Pons’ year at the start of 1987, until a fall in practice at his home race in Jerez gave him a painful hand injury which hampered him for a good part of the season. Despite that, Sito scored points in every GP except Sweden, where what the Japanese termed ‘ignition trouble’ (factory Hondas never officially seized!) caused his only mechanical retirement that year.