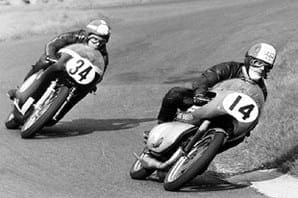 Lincolnshire motorcycling all-rounder Pete Boast, along with Errol Gowshall and circuit manager Jon Rush are the driving force behind the event, which will see three classic races take to the track on Sunday, along with a Classic Racer Champions of Cadwell parade.

The Charlie Wilkinson Trophy, named after the long-time circuit owner, is a 10 lap race for pre 1990 GP two-strokes, 175cc to 750cc, which obviously includes TZ Yamaha, Armstrong, Suzuki RG500 and TZ750. Only genuine racing machines will be accepted and tyre warmers and wets aren’t permitted.

The Tommy Wood Trophy, presented by Louth and District MCC, will be a pre 1992 Superbike race, 250cc to 1100cc, aimed at attracting the big four-strokes, such as Suzuki XR69, Honda RC30s, Yamaha OWO1, and Suzuki GSXR1100, but two-strokes can also run in the class.

Entry forms for the races are available from the Auto 66 Club website or from Pete Boast at pete.boast1@btinternet.com

With 80 years of great racing to celebrate, the feature races are only part of what is planned for the weekend. Many former Cadwell racers, turned collectors, have promised a stunning line-up of machinery.

Ivan Rhodes will bring along some of his amazing Velocette collection, while John Chapman has promised Honda 350 and 500 Fours plus an RS500 and Paul Truelove a Kawasaki GP500, MZ 250 and three TZ750s from his collection.

To make the weekend complete Classic Track Days are on track on Friday and Saturday. To book a slot, or for more information, email info@classictrackdays.com or call 07971 424472.