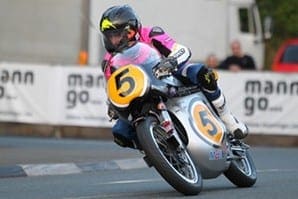 Nine times TT winner Anstey was lying second last year in the inaugural Senior Classic TT when a piston failure caused his retirement on the second lap of the four lap race. Anstey commented that he had to re-learn all his old "250" lines where you used every inch of the road, and sometimes more!

This year McIntosh will return with two identical models of his New Zealand built 1962 Manx Norton replicas for Anstey, so that the race bike is still fresh at the end of qualifying, giving Bruce his best chance of a finish.

McIntosh said "It was a major blow to be the fastest single cylinder bike in all the practices and never miss a beat all week and then fail to finish when lying in second place. We had to come back and give our New Zealand built bike another chance to live up to its 'Manx' Norton name."

Bruce Anstey will be competing for the Mike Hailwood Trophy awarded for 500cc single cylinder machines using a machine that is essentially true to 1962 specification against the much later pre-1973 period multi-cylinder bikes.