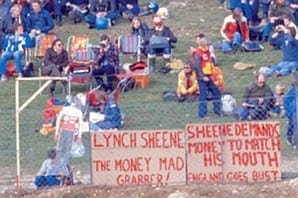 “I did my best to come to terms with MCD but when I finally managed to contact Chris Lowe in America on Friday, he just did not seem interested,” Sheene told Motor Cycle Weekly.

However, it was all change a week later when the same newspaper announced that MCD and Sheene had come to a compromise. MCW reported that Barry Sheene’s demands for the three match race meetings had been met in full, meaning he was to be paid in the region of £20,000, although he had agreed to donate some of the money to The Joan Seeley Cancer Fund.

As it turned out Sheene didn’t have a great weekend on his new Yamahas, with a fourth place being his best finish, leaving him trailing ninth in the overall points table, while the American team romped to a comfortable victory.

The pic shows not all the fans thought that Barry offered great value for money that Easter as feelings clearly ran high at the opening Brands Hatch round.