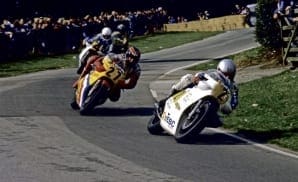 EVERY now and again there arises a rider who could hop on any bike and blast the hell out of his peers. Mike Hailwood was one, Bill Ivy another. But there’s another example – albeit a much lesser known one – who shared the majestic two-wheeled prowess of both Hailwood and Ivy – Bob Smith.

Bob Smith: the peoples’ champion
Bob leads into Scarborough’s Esses on the Suzuki RG 500, ahead of Steve Henshaw, Mark Salle
Bob Smith was every part the gritty rider.

He was a self-employed diesel fitter throughout the week and he raced at the weekend.

Unlike the likes of Hailwood, however, Smith’s apprenticeship wasn’t on ex-works machines on race circuits, it was on St Helens A roads, dodging the region’s constabulary on his old BSA Rocket.

His widow, Lynda Smith, said: “Bob was so fast on the roads nobody would dare challenge him. They knew they couldn’t beat him.

“I remember once we were riding around some zigzag bends when a bike overtook us. That didn’t go down well with Bob. He changed gear, chased after the bike and overtook him.

“At the next set of lights the lad pulled up at the side of him, lifted his visor and said “f***** hell, if I’d known it was you I wouldn’t have overtaken.”