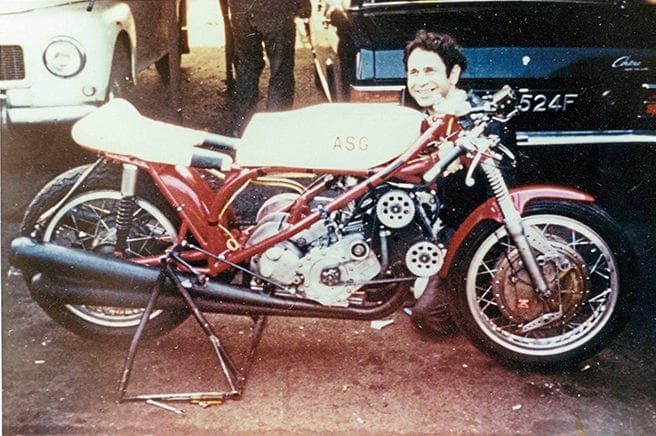 Dear CR,
Please find enclosed a letter and a picture I received from Andreas Georgeades in 1972. It will give you the identification of the bike Mark Kulczyk saw in 1973. The exhaust pipes are a bit different, but it is the same bike. Andreas Georgeades was a Greek, who lived in South Africa and later also in Canada. Sorry for the quality of the photograph, I didn’t take it…
Jan Burgers 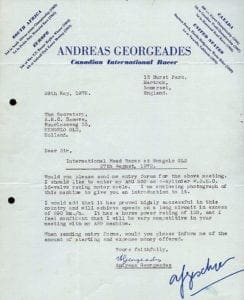 Dear CR,
In response to the Star Letter in issue 191, page 14, this bike is motorised not by a motorcycle engine, but by the Honda S600 engine, a wonderful little sport car of the Sixties (double OHC and liquid-cooled). This bike was built by Andreas Susan Georgeades (ASG!), and he’s the pilot too! This ASG was slow and did not have good results in his career. Andreas converted the liquid cooling to air cooling and two valves/cylinder by four valves/cylinder from CR72 Honda. Also Andreas took off the chain cam and replaced it with one belt! A big work! Thanks CR… I have all the issues since number one!
Pierre de Pauw
France 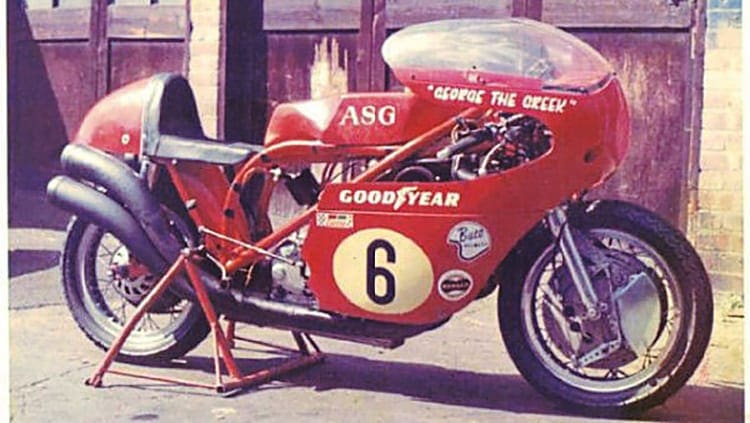 Dear CR,
With reference to Mark Kulczyk’s letter in CR191, the no 49 ASG shown was taken at the 1972 John Player International. The rider, Andreas Georgeades, is listed in my program in the 500 and 1000 races and his country given as Canada. This rider, when described as South African, came fifth in the one-off Canadian GP of 1967. I have a report in an old scrapbook by your former scribe Jim Greening who states ASG was riding a race kitted Velocette Thruxton. He was thus awarded two world championship points when only the first six riders qualified for them. The race was over 40 laps and lasted 75 minutes. Mike Hailwood, Honda; Ago, MV and Mike Duff, Arter Matchless were placed first, second and third. ASG completed 39 laps in the damp conditions, so must have been a fair rider. There were 12 finishers out of 34 starters. Congratulations on the recent issues which contain many excellent articles.
Tim Bolton
Hull

Thank you all for the many responses we had to the ASG and its history. I’m sorry that we didn’t have space to print them all but there have been lots of replies to the original query. Once again, CR readers have proved themselves a fount of fine and heartfelt knowledge. You chaps are brilliant. Tony.